In Hughes, the petitioner is asking the Court to revisit its fractured decision in Freeman v. United States, that tried to decide when criminal defendants who entered into plea bargains are eligible for sentence reductions. How the Court decides Hughes has direct implications for how the lower courts apply the fractured decision in Rapanos v. United States. In Rapanos, a majority of the Court struck down EPA and Army Corps regulations categorically defining all tributaries as “navigable waters” under the Clean Water Act, but disagreed why. Four justices wrote that the term only includes relatively permanent, continuously flowing streams, rivers, and lakes, while one justice wrote that the term also includes any other water with a vaguely explained “significant nexus” with actually-navigable rivers and lakes.

Lower courts have ruled that the single justice “significant nexus” opinion in Rapanos is the binding interpretation of the Act, despite eight other justices disagreeing with it. Some have held this because it is the least restrictive of government power. Others have held that the four dissenting justices would always find Clean Water Act coverage under that test as well as their own more permissive view. Finally, some lower courts try to predict how the Supreme Court would resolve particular cases based on the various opinions in Rapanos. But all of these are at odds with what Marks allows.

If the Supreme Court in Hughes refines Marks in any meaningful way, then lower courts will likely have to revisit how they have interpreted Rapanos as well. Interestingly, the Solicitor General conceded as much during oral argument:

MS. KOVNER: So I think an additional circumstance, you know, some of the amicus briefs allude to is interpreting this Court’s decision in Rapanos. You know, we think this — this same issue comes up there, and, you know, the two circuits that have indicated shared reasoning is necessary, I think, would regard this Court’s decision in Rapanos as not having precedential effect. 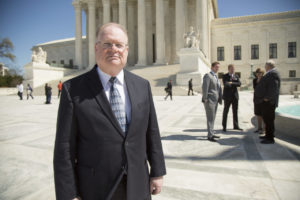 Our late friend and dear colleague Reed Hopper successfully argued the Rapanos case at the Supreme Court of the United States in 2006.

The Hill: California’s Newsom is wrong: Martial law is always a last resort March 30, 2020 I By TIMOTHY SNOWBALL

How is COVID-19 affecting current Supreme Court cases? March 26, 2020 I By MARK MILLER