Today, PLF filed its opening brief on behalf of Minerva Dairy asking the federal district court to strike down Wisconsin’s butter grading law. Since we filed our complaint back in April, we have been busy gathering evidence about the law.  And although we thought the law unconstitutional when we filed the complaint, everything we have uncovered since that time has only reinforced our beliefs.

This lawsuit concerns a Wisconsin law that prevents butter makers  from selling their products in Wisconsin unless they first go through the arduous and cost prohibitive process of getting their butter graded. The lawsuit alleges that Wisconsin’s law violates the Commerce Clause, as well as the Due Process and Equal Protection Clauses of the Fourteenth Amendment.  As I explained back in April, “Most butters sold in the United States are not graded, and graded butter is no more safe than ungraded butter. That’s why neither the USDA nor 49 states (not named Wisconsin) require butter to be graded for it to be sold.  In fact, all ‘graded butter’ ensures is that the butter is going to taste exactly how the government wants it to taste. But Minerva Dairy sells an artisanal, amish-churned butter. It does not want its butter identified with that government-mandated taste.”

That’s still true, but what we’ve learned through our evidence gathering process is just how arbitrary and nonsensical the butter grading process is.  As we detail in our filing with the court today, no Wisconsin consumer knows what a butter grade is supposed to mean — even the government’s designated experts couldn’t explain the state’s butter grading criteria. Equally as bad, even if someone understood what “ragged-boring,” “mealy,” and “mottled” meant, they would be completely unable to tell whether the butter had those characteristics based on the butter grade assigned.  Each butter grade is a composite score based on 31 separate butter characteristics that the government boils down into three grades that are meant to signify whether the butter is “highly pleasing,” “pleasing,” or “fairly pleasing.” So even if a butter is “smothered,” the consumer would have no way of knowing based on the grade assigned. The government might just as well place a Sesame Street sticker on the butter packaging — it would reveal just as much information.

There’s a lot more interesting information like that in our most recent filing with the court, and I encourage all those interested in the case to give it a read. In a couple of weeks we will be filing a few additional briefs in the case, and after that, it will be up for the court to decide whether Wisconsin’s butter grading law meets constitutional standards. 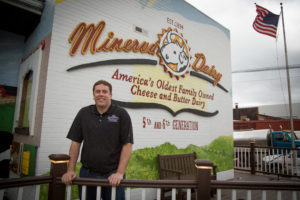