Do minor bureaucrats tell federal judges what to think?

Last week PLF filed this amicus brief in the Supreme Court of the United States in Gloucester County School Board v. G.G. The question in this case is whether federal judges interpret federal law, or whether low level agency bureaucrats do. PLF takes the position that judges have the Constitutional responsibility to independently read and interpret federal law, as a check on the executive agencies whose Constitutional role is to enforce the law.

The context of that question in this case is whether federal law requires local schools to allow transgender students to use the restroom of their choice, or whether it allows those schools to require all students to use the restroom of their biological sex. This topic is one of ongoing public debate, and reasonable minds can disagree on how to best accommodate transgender students. But one thing is certain: federal law does not dictate how local school districts resolve this difficult question.

But in this particular case, a low level official in the federal Department of Education wrote a private letter to the Gloucester County School Board in North Carolina, telling the district that in his opinion, the federal law which protects the ability of schools to provide sex segregated restroom facilities requires that schools allow transgender students to use the restroom of their choice. While no reasonable reading of the statute or implementing regulations supports this opinion, the lower federal court decided the case in favor of the government, on the ground that the Acting Deputy Assistant Secretary for Policy (yes, that is a thing in the federal government) has the power to tell the court what federal law requires.

Our brief argues that it is the exclusive responsibility of the federal courts to interpret federal law, and that the assignment of this responsibility to the judiciary in the Constitution is part of the essential separation of powers that checks the power of the federal government and protects individual liberty. The brief also surveys the long history of the Education Department’s unilateral and extralegal expansion of its authority over collegiate and even high school education in the United States, through methods like the private letter at issue in this case. We call on the Supreme Court to hold that it and the lower federal courts have a responsibility to independently interpret the requirements of federal law, and not minor bureaucrats. 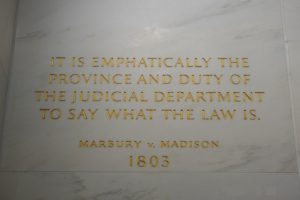 In the words of Chief Justice Marshall, as they appear in a plaque at the Supreme Court of the United States