Motion for Summary Judgment in McLean v. City of Alexandria

Yesterday, PLF filed a motion for summary judgment, asking a federal court to hold that the City of Alexandria violated the First Amendment through its enforcement of a city ordinance that made it illegal to display “For Sale” signs on parked cars.

As our readers will recall, we filed this lawsuit in October against the City on behalf of our client Scott McLean. The City cited McLean a couple of years ago for placing two standard “For Sale” signs in his car window. He paid the ticket and finally sold his car four months later by parking his car in a neighboring City and walking the half-mile to and from his home. When he wanted to sell his truck more than a year later, he decided to reach out to PLF for help fighting the City’s unconstitutional ordinance.

A few days after PLF filed suit, the City suspended enforcement of the ordinance. Five months later, it finally repealed the ordinance, admitting that it was “outdated” and “not necessary.” Yet it has still refused to admit that it violated McLean’s free speech rights by fining him and making it illegal for him to truthfully advertise his car, and later, his truck. Perhaps the City doesn’t want to admit that it has illegally taken tens of thousands of dollars from its own citizens. Since 2010 alone, the City has ticketed hundreds of people under the ordinance, amounting to more than $28,000 in fines. And the law has been on the books for more than a half-century.

We filed a motion for summary judgment today, asking the judge to vindicate Scott 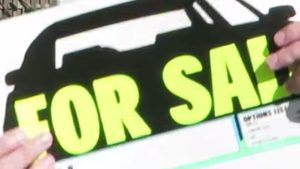 McLean’s right – and the importance of the First Amendment with a symbolic award of nominal damages and a declaration that the City’s sign law violated his rights. We also responded to the City’s Renewed Motion to Dismiss, explaining why a change in law does not make moot a claim seeking relief for past violation of constitutional rights.