My congressional testimony this week: EPA's Science Advisory Board

On Wednesday, May 20, 2015, I testified before a senate subcommittee seeking to make EPA’s Science Advisory Board more transparent, effective, and fair.  The senate bill at issue, S. 543, is being proffered in response to criticism that EPA is not using the Board properly to provide peer review of the scientific bases of its regulatory proposals.  My testimony criticized EPA’s failure to send proposed regulations governing carbon dioxide emissions to the Board for expert analysis before finalizing the rules. 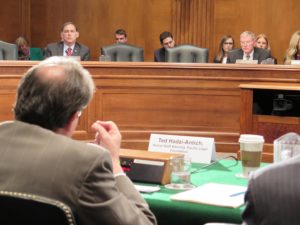 Carbon dioxide is a  natural substance that is everywhere and in everything.  By regulating that ubiquitous substance, EPA gives itself the potential authority to regulate virtually everything, everywhere.  That is an unprecedented reach for power by a federal administrative agency.  Accordingly, if anything merits peer review from the top scientific experts, it is the scientific analysis forming the foundation of EPA’s carbon dioxide regulatory proposals.  For more details, see my written and oral (time stamp 41) testimony.