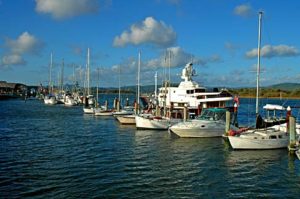 This morning, we filed a complaint in federal district court in D.C. challenging the National Marine Fisheries Service’s 2016 “biological opinion” governing FEMA’s implementation of the national flood insurance program in Oregon. Representing the City of Coos Bay, Oregon, we argue in the lawsuit that the biological opinion—which may be issued only when a proposed federal action will jeopardize the continued existence of any species protected under the Endangered Species Act, or damage its critical habitat—is without legal foundation, because FEMA’s administration of the flood insurance program has no legal effect on the environment.

Relying on parallel case law interpreting the National Environmental Policy Act, the complaint explains that FEMA is not, as a matter of law, responsible for the effects of floodplain development that may be covered by FEMA insurance. That is so because FEMA has no legal authority to authorize or to prohibit that development—you don’t need FEMA insurance in order to build in a floodplain. In contrast, you likely do need the approval of local and state agencies, and other federal agencies. Thus, the obligation to avoid harm to listed species and their habitat falls to these other agencies, not to FEMA. Our lawsuit joins another action, filed in the same court earlier this year on behalf of a coalition of home builders and local Oregon governments.

Although our case focuses on the Service’s unwarranted expansion of its ESA consultation power with respect to the Oregon insurance program, the controversy extends beyond the context of flood control. If the Service is right that it can issue a biological opinion substantially altering federal agency actions simply because those actions may facilitate other independent actors to take steps that in turn may affect listed species and their habitat, then there will be few if any federal activities exempt from the Service’s review. And, at that point, the ESA will become the superstatute that so many environmentalists and not a few federal bureaucrats have for so long hoped to establish.