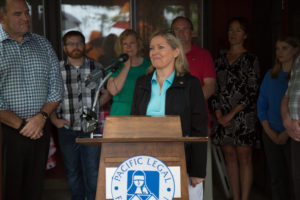 Donna Murr speaks at a press conference at the Murr family’s cabin.

As many of you may be aware, we are just one week away from oral arguments in the Supreme Court in the case of Murr v. Wisconsin. Murr is the latest in a long line of property rights cases litigated by Pacific Legal Foundation all the way to the highest court in America. Todd Gaziano and I recently co-authored a new PLF LibertyBrief that places Murr in the larger context of constitutional protections of property rights and explains its significance.

Read an interactive version of the LibertyBrief online.

The LibertyBrief is focused on Regulatory Takings, an area of property law that has resulted in several of PLF’s Supreme Court Victories. Under Supreme Court precedent, when government “goes too far” in regulating away use or value of property, they are required to pay just compensation under the Fifth Amendment Takings Clause. There are several tests that courts apply when evaluating regulatory takings, with two categorical or “per se” tests, and a more convoluted ad hoc, multi-factor inquiry that was established in Penn Central Transportation Co. v. New York.

The method used to define a property right can determine which regulatory takings test a court will apply. In Murr v. Wisconsin, the Wisconsin appellate court lumped together two contiguous though independent legal parcels owned by a group of adult siblings, the Murrs. The court then applied the Penn Central multi-factor inquiry to the two parcels together. Because this diluted the perceived impact of the regulation, the court denied the Murrs compensation.

PLF and the Murrs believe that the independent legally-created parcel should be the presumptive unit of property when courts undertake a regulatory takings analysis. This makes sense for property owners like the Murrs, who purchased two separate lots at different times and for different purposes. This also squares with traditional state property law. After all, Wisconsin legally created the two separate lots under state law, and has taxed the Murrs on those lots as if they are independent parcels for over 50 years. Next Monday, March 20, PLF attorney John Groen will ask the Supreme Court to reaffirm the constitutional protections of the Fifth Amendment Takings Clause. A victory will ensure that similarly situated property owners nationwide will receive just compensation when government regulation of a single parcel “goes too far.”

For more information about about Murr v. Wisconsin, you can read the LibertyBrief or check out our other online resources.