Is the ocean "land owned or controlled by the Federal government"?

As President Obama’s final term came to a close, he engaged in what has unfortunately become a favorite pastime for lame duck Presidents: trying to build a legacy by abusing the Antiquities Act. President Obama was the Barry Bonds of this abuse, shattering his predecessors’ records. All told, he declared more than 550 million acres off-limits to reasonable, productive use—more than double the prior record.

But, also like Barry Bonds, the President obtained his inauspicious title through cheating. The Antiquities Act authorizes the President to declare monuments on “land owned or controlled by the Federal government.” In the twilight of his final term, the President used this power to declare a 5,000 square mile area of the ocean to be the Northeast Canyons and Seamount Marine National Monument. Anyone with a passing familiarity with the English language will immediately recognize that the ocean is not “land owned or controlled by the Federal government.”

At 5,000 square miles, this monument is roughly the size of the state of Connecticut. For decades, it has been a prime commercial fishing area for the iconic New England and east coast fishing communities. So it is difficult to overstate just how destructive the President’s unilateral decision would be, if upheld by the courts. 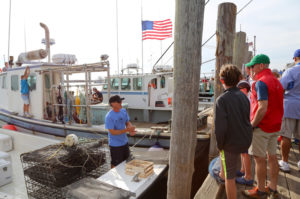 The monument designation also threatens to undermine years’ worth of effort by our clients to promote sustainable fishing in the region. Under the Magnuson-Stevens Act, the federal statute that regulates ocean fishing, our clients have worked with state and federal officials to reduce the number of permits in the area and thereby reduce pressures on the fishery. These sacrifices have been costly, but the organizations have made them knowing that they will lead to long-term environmental and economic benefits for the fishery. The monument designation robs them of those benefits.

By shutting off this Nutmeg State-sized area to fishermen, the proclamation will force them to relocate from this healthy fishery to other areas that are less sustainable. The move will also increase incidental impacts on other species and conflicts between gear types.

Monument designations under the Antiquities Act are controversial for good reason. This statute empowers the President to prohibit productive use of federal lands with the mere stroke of a pen. He doesn’t have to consider the impacts on surrounding communities or anything else.

But the statute isn’t a blank check. It limits monument designations to “land owned or controlled by the Federal government.” If Presidents are permitted to erode that limit, there’s no end to the abuses they could perpetrate.