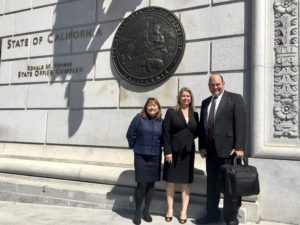 The CA Supreme Court keeps an archive of oral argument webcasts, which will be available at this location.

Both sides were given tough questions by the justices, and it is always impossible to know exactly where the court stands, but the clear focus of the oral arguments was the threshold issue of whether or not the homeowners “waived” their right to judicial review of their seawall permit when they began construction.

California law provides a mechanism for judicial review of agency actions, California Code of Civil Procedure section 1094.5. When the California Coastal Commission approved the seawall needed to protect the Encinitas blufftop homes of Barbara Lynch and Thomas Frick, the homeowners filed a 1094.5 action to challenge a 20-year limitation placed on the permit. A few months later, the Coastal Commission nonetheless issued the final building permit, and the families began construction of a state of the art seawall. But now, the CCC now argues that the families should have waited for litigation to conclude before they began building, and that building waived their right to continue their legal challenge.

Of course, the permit was issued in 2011, the seawall was needed to prevent the potential collapse of the two homes into the sea, and the case still remains ongoing now in 2017. PLF argued today that families should not be required to wait for the end of lengthy court proceedings when they are issued a permit, especially when the conditions they are challenging are purely legal conditions, not physical changes to the permitted development. After all, the CCC cannot argue that the physical seawall they approved is in any way inadequate–it is state of the art. Instead, it appears that the CCC wants another crack at denying the permit (or exacting mitigation fees) in 20 years.

Currently, the Coastal Act says that the CCC “shall issue” seawall permits for existing structures. The CCC hopes that this will change in the future, whether by removing or changing that language, or by altering the definition of existing structures.

Many of the justices focused on whether or not the 20-year limitation was truly a purely legal condition, since the CCC may have approved a different seawall if they knew the 20-year expiration date was invalid. But it was the CCC who imposed all the conditions for building the seawall, and they required it to be environmentally and visually state of the art, and built to last 75 years. But they then posted an arbitrary 20-year expiration date in the hopes that legislative change would allow them to order future homeowners to tear the wall down anyway.

On the other side, the justices asked the Attorney General why the CCC approved the final permit when they were fully aware that the homeowners were challenging the 20-year condition in a pending lawsuit. Under the CCC’s theory, once the permit was issued, the homeowners were faced with the choice of abandoning their lawsuit and  accepting the potentially illegal condition, or continue with their lawsuit and hope that their home was still standing by the time the lawsuit was complete. Justice Cuéllar noted the unsavory position this might leave homeowners such as the Lynches and Fricks, who would likely have no choice but to accept condition, no matter how onerous.

There was very little discussion beyond the waiver issue, but Justice Werdegar noted the significant diminution in home value that would occur to the homes if future buyers would be facing a re-permitting process for an existing seawall that could cost tens of thousands of dollars and–if unsuccessful–would leave their homes vulnerable to collapsing down a bluff face.

Under California law, we will have a decision within 90 days. We hope the California Supreme Court will preserve homeowners’ right to judicial review of agency actions, and affirm that an expiration date on a seawall is an unconstitutional condition.