Blog > Issues > Property Rights > Our fight with EPA: Andy Johnson’s story in his own words 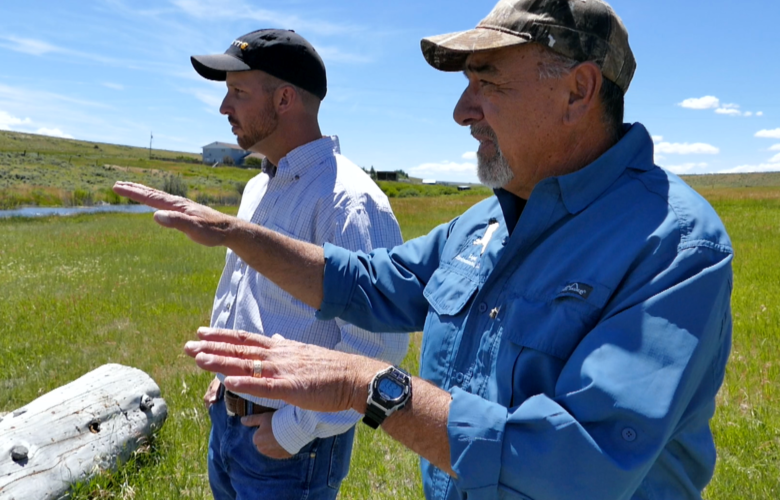 Today, the president is signing an executive order designed to bring more accountability to federal agencies. This executive order comes partly as a result of PLF research and cases battling bureaucratic overreach. PLF client Andy Johnson will be at the signing ceremony. Below is an article from 2016 that Andy wrote describing, in his own words, his case and his battle against government overreach.

My name is Andy Johnson and I live with my wife and four daughters on just under nine acres in Fort Bridger, Wyoming. I am 32 years old and work for the U.S. Steel Workers Union as a welder. We bought our property about twelve years ago. We wanted to raise livestock and enjoy the country lifestyle with our family and friends. Our property has a nice, big hay field that is irrigated and 6 Mile Creek runs through the bottom section of the field. We have worked hard to improve our property and have built a house, livestock corral, a new road and much more. We started raising Angus steers and had a few horses.

One day, I contacted the local State Engineers Department to see if it would be possible to build a stock pond using the water out of 6 mile creek. They came out to our property and examined and surveyed the land. They informed us that they would help us complete the form for a Wyoming stock pond permit. They were excited about the project and said our property was a perfect place for a pond. They also informed us that there were literally thousands of stock ponds throughout Wyoming just like this one. We completed the application and sent it in to Cheyenne, Wyoming for approval. We received the permit about 5 months later. We had 3 years to complete the project. I started getting materials and equipment. It took almost a full year before we had saved enough money and had everything ready. With a Wyoming stock pond permit in hand we started the project. It took nearly six months of blood, sweat and tears for my wife and I to complete the pond. All the work was done by us and we had invested a lot of time and money into the pond. Our main goal was to provide a safe place for our livestock to drink and a place for our kids to play. When the pond was nearly completed, we received a call from the Army Corps of Engineers.

The Army Corps had been notified by our neighbor of our project. We told them we had, to the best of our knowledge, complied with all local and state laws and that we even had a Wyoming permit in hand. We told them if there was a problem we would be more than happy to work with them to correct it. Neither the state of Wyoming, nor myself, had any knowledge of any possible issue. I immediately contacted the Wyoming State Engineers office which informed me that the Army Corps did not regulate stock ponds and we were exempt. Some time passed and we received a letter demanding us to stop the construction. We were already done with the project. Then the Army Corps asked if they could come out to our property and inspect the project. We agreed that this would be fine and felt that they would be very pleased with all the work and how the pond turned out. Two young adults from the Army Corps came out and took some measurements and a few pictures. They said they did not know if we were in violation or not. They also mentioned that they did not have the best relationship with the state of Wyoming and they needed to ‘work on that’.

Some time passed and then we were contacted by the EPA (Environmental Protection Agency). At this point we were a little confused at why the EPA would be interested in our perfectly-legal permitted stock pond. Not to mention the crystal clear water that keeps 6-7 pound native Brown Trout and world class Brook Trout! We also see all kinds of water fowl, moose, bald eagles and much more. The EPA asked to come look at our property, to which we also agreed.  That decision turned out to be one the biggest mistakes of our lives!  Richard Clark from Region 8 came to our house. We welcomed him in and he informed us of how ‘serious’ this matter was. He said he did not know if we were in violation or not but we would have to spend a lot of money and prove that we were not! Everything about that man and the EPA felt wrong and we knew we would not just lay down, we had to fight for this!

About six months went by without hearing a word when my wife called me at work and said something came in the mail from the EPA and it was not good. I got home and read it. It was a compliance order which demanded us to hire a consultant, revise a plan and submit it to the EPA that we would completely rip out our pond and restore the property to original specs or face possible criminal charges, and civil fines of $37,500 per day or $75,000 per day for willful violations! We were shocked and devastated. The thought of financial ruin and destroying the pond that we worked so hard to build with our own two hands was unfathomable.

We immediately contacted our state senators, John Barasso and Mike Enzi, which got the ball rolling. They wrote a strongly-worded letter to the EPA demanding they drop the order and leave us alone. There was a news release in Washington D.C. and the next thing we know we are flooded with reporters and concerned supporters from across the country. It was very evident that thousands of people all over the U.S. were very unhappy and frustrated with the EPA’s abuse of authority and illegal overreach. Our story was covered by a number of news outlets, including: the New York Times, Glenn Beck, John Stossel, Fox & Friends, Glen Woods’ radio show and many more radio interviews from all over. Our lives were forever changed.

We were fortunate enough to get in touch with an attorney from Cheyenne, Wyoming named Dan Frank. He was highly recommended and knew local law. We were contacted by a wetland expert named, Ray Kagel and his partner and wife, Susan. Ray informed us that he was formerly of the Army Corps of Engineers enforcement office in Region 8 and that he now has a private practice. They came down to our property and inspected the project. They informed us that this was clearly not a violation for three very obvious reasons:

Ray said this was a slam dunk case for us! So we continued to show the EPA rock solid facts as to why this project was clearly exempt and actually a huge environmental benefit in every way imaginable.

We were then contacted by Pacific Legal Foundation (PLF) and Mountain States Legal Foundation (MSLF) and joined forces. The arrogance of the EPA and their refusal to reason left us no choice but to file suit in August of 2015. Only then did we see a change of attitude from the power thirsty agency we call the EPA. After threatening our family for two years with financial ruin and demanding the pond’s removal, EPA agreed to a deal too good for us to refuse: They agreed not to sue us or pursue any further enforcement action; we wouldn’t have to accept federal jurisdiction over our property; we wouldn’t be required to get a federal permit for the pond; and, best of all, there would be absolutely no fines and we wouldn’t have to rip out the pond. All we have to do is plant willows around the pond—building on the environmental benefits we’d created—and put up a temporary livestock fence for less than two years!

This is a huge victory for us as well as private property owners across the country. The next family that finds itself in our situation, facing ominous threats from EPA, can take heart in knowing that many of these threats will not come to pass. If, like us, you stand up to the overreaching bureaucrats, they may very well back down.

Thank you to Jonathan Wood of PLF, Maegan Woita of MSLF, Dan Frank, Ray and Susan Kagel, Karen Budd-Falen, Harriet Hageman and the many many others that supported our case.  And if we could say anything to the EPA….this was about more than just a pond.  This was about a family of good, hard-working Americans that were willing to fight to the end for what they believed in!

Polluters and the EPA are trying to block property owners from suing polluters November 22, 2019 I By JONATHAN WOOD