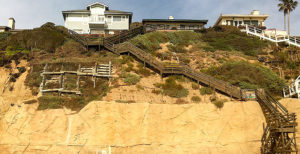 Our seawall condition case, Lynch v. California Coastal Commission, will be argued tomorrow morning, May 4, 2017, in front of the California Supreme Court at 9:00 AM PST.

There is a live stream available starting at 9am by clicking the “View Live” button on the Court’s homepage, and afterwards the argument will be also be archived here.

Barbara Lynch lived atop a bluff in Encinitas for decades, but in 2010 the seawall protecting her home collapsed. Her home, along with her neighbor Thomas Frick’s house, was in danger of sliding down the bluff. The two neighbors quickly sought–and were given–approval to rebuild the seawall and a damaged staircase by the City of Encinitas. But the California Coastal Commission refused to approve the permit.

The CCC denied outright permission to rebuild the previously permitted staircase, and demanded an onerous condition for the seawall permit. The CCC wanted Barbara and Thomas to consent to a 20-year permit, after which the homeowners would have to return and ask the CCC for permission to keep the seawall.

Why would the CCC want to impose such a condition? Well, under the California Coastal Act, the the CCC “shall issue” permits for seawalls to protect homes. But the CCC has long lobbied for the language to be changed, giving them discretion as to whether or not they grant protection, or doom homes to collapse, forcing retreat of homeowners from the coast. The CCC hoped that 20 years from now, the legislative language will have changed, and they could force the homeowners to remove the seawall and abandon the homes.

Faced with the imminent destruction of their home, Barbara and Thomas agreed to the conditions under protest and brought a lawsuit against the commission, arguing that the condition was unconstitutional. They won in the trial court, but the court of appeal held that signing the permit waived Thomas and Barbara’s right to challenge it as unconstitutional, and that the CCC could lawfully impose durational limits on seawall permits. While Barbara has since passed away, her children now jointly own the house, and are continuing the fight with PLF to protect the homes.

Tomorrow, PLF attorney John Groen (who recently argued Murr v. Wisconsin in the United States Supreme Court) will be arguing in that the trial court got it right. Property owners, especially those such as the Lynches and the Fricks, who have no choice but to accept onerous permit conditions should still have a right to their day in court. And when the Coastal Act says that the CCC “shall grant” permits for seawalls to protect homes, those permits shouldn’t have an expiration date, set in the hopes that a future CCC can force the removal of shoreline protection.