More than two centuries ago, great statesmen assembled in Philadelphia to write a new Constitution that would “preserve the blessings of liberty.” Among them were some of the nation’s leading entrepreneurs, including Pennsylvania’s own Ben Franklin, one of the great self-made businessmen in American history. How sad they would be to learn that today, the Keystone State imposes a harsh Competitor’s Veto law that essentially forces business owners to get permission from their own competitors before they can start a business.

We’re talking about people like our newest clients, Cosmo and MaryAnne Losco. They’re a couple in Telford, a Philly suburb, and they want to start a new moving company. But—they aren’t allowed to. 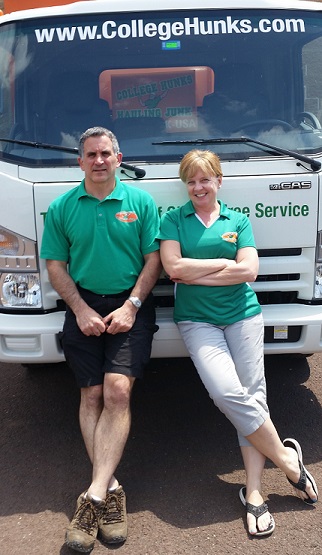 Cosmo and MaryAnne Losco
It isn’t that they’re unskilled or dishonest or anything like that. Instead, Pennsylvania’s Competitor’s Veto law says they cannot run a moving company until they get a Certificate of Public Convenience. And to get one of those, they first have to allow the existing moving companies in the state to file a protest against their application for a Certificate. If existing companies do protest, the Loscos’ licensing application will be automatically put on hold for a month, to encourage them to “negotiate” with the existing companies and see where they won’t object to the Loscos operating. If those negotiation’s don’t work, the Loscos will be forced to prove to a group of Pennsylvania bureaucrats that there’s a “need” for a new moving company.

We think these Competitor’s Laws are unconstitutional. The Supreme Court has long said that although the government can use licensing laws to protect the public against dangerous or dishonest businesses, they can’t use the law simply to pick their favorites in the marketplace. That’s why PLF has been challenging these laws across the country. We’ve won victories in Oregon, Missouri, and Kentucky. Just this month, Montana lawmakers changed their Competitor’s Veto law to allow our client, Tracie Pabst, to get a license to run a taxi company in that state. Now, in our latest case, we’re taking the fight for economic liberty to the place where American small business was born.

In 1728, Ben Franklin and a friend started the Pennsylvania Gazette. It was the first of the many printing enterprises that would make him a famous author, a rich businessman, a great scientist and an honored statesman. Later in life he would advise Europeans considering a move to America that only hard work, not political influence, would lead to success here, “where people do not inquire concerning a Stranger, What is he? but, What can he do? If he has any useful Art, he is welcome; and if he exercises it, and behaves well, he will be respected by all that know him; but a mere Man of Quality, who, on that Account, wants to live upon the Public, by some Office or Salary, will be despis’d and disregarded.” One can hardly imagine what this country would be like if Philadelphia’s existing newspapers had been allowed to block him from even opening his doors by using a Competitor’s Veto law, and to “live upon the public” through that form of government favoritism, instead of by their own hard work.

We think the Loscos and all other Americans should have the same freedom of economic opportunity, and one of the essential parts of the liberty that the Constitution protects for everyone. You can learn more about the Loscos case by reading our complaint and our litigation backgrounder.