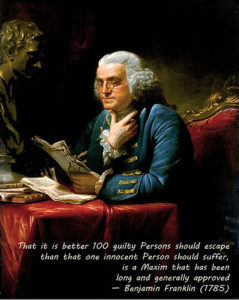 Most people have heard of William Blackstone’s principle that it is better that many guilty people escape punishment than that a single innocent person be imprisoned, even if they haven’t heard of Blackstone himself. This ancient value underlies the presumption of innocence in our criminal law and many other cherished protections we provide those accused of crimes. (Image by Kazvorpal.)

Yesterday, PLF filed its opening brief opening brief in WildEarth Guardians v. Department of Justice to defend that constitutional value. We represent several southwestern agricultural organizations that have intervened in a lawsuit in which a radical environmental group is suing the Department of Justice to force it to imprison people for innocent mistakes that affect endangered species.

Under the Endangered Species Act, it is a crime to “knowingly violate” the statute’s prohibition against the “take” of listed species. According to Supreme Court precedent, “knowingly” requires “proof of knowledge of the facts that constitute the offense.” When Congress last amended the Endangered Species Act’s criminal provisions, it confirmed that it interpreted the statute the same way. Legislative history explains that it understood “knowingly” to require knowledge of the facts but not knowledge of the law. For decades, the United States has interpreted the statute to require federal prosecutors to prove a criminal defendant knew his actions would cause take and knew the species that would be taken. If you were driving down a highway and an endangered rodent scurried in front of your car, you couldn’t be thrown in prison for the innocent accident.

This summer, a federal district court overturned this interpretation, siding with WildEarth Guardians in its extremist attempt to worsen overcriminalization. The court held that all a person need know to be convicted is that they were engaged in the act that led to the take of a listed species.

According to the district court’s decision, a person who accidentally shoots an endangered species would not be subject to criminal punishment only “if he did not intend to discharge his firearm, or the weapon malfunctioned, or similar circumstances occurred.” This is insufficient to protect against criminal punishment for traditionally lawful activity. What would it mean for other activities that may cause take? Is a person who accidentally hits a protected rodent scurrying across the highway guilty unless his brakes malfunctioned? Would someone who accidentally stepped on a protected beetle be guilty unless he was sleepwalking?

WildEarth Guardians’ case is not only contrary to the Endangered Species Act’s text and Supreme Court precedent, it is also extremely cavalier with people’s lives. The punishments for knowingly violating the take prohibition are severe. For a single violation, you could be thrown in federal prison for a year, criminally fined $100,000, civilly fined $50,000, and lose a variety of federal permits and licenses.

The district court expressed indifference to “impos[ing] liability upon at least some innocents” because they could only be robbed of a year of their lives, forced to pay a six-figure fine, and sacrifice licenses and permits that may be the basis of their livelihoods

I don’t know about you, but I wouldn’t call these punishments trivial if I were the one facing them. And I suspect WildEarth Guardians’ activists wouldn’t either. The dispute calls to mind a memorable scene from A Man For All Seasons, the story of Sir Thomas More’s execution for not endorsing King Henry VIII’s divorce from Catherine of Aragon. Thomas More gets into an argument with Richard Roper over whether to arrest a rival. More refuses because he has committed no crime and explains that he would give even the devil the benefit of law—for his own sake.

WildEarth Guardians has let its zeal to enforce environmental regulation cause it to lose sight of the rule of law. There’s a good reason why we reserve criminal punishment for those who commit evil acts with a guilty mind—a government permitted to deprive us of liberty completely (which is what it means to be imprisoned) for innocent acts would be far too powerful. No system of law committed to liberty, as ours is, could allow it and no reasonable person would want to risk that power being turned on them for their innocent actions.

We explain in our brief that Supreme Court precedent requires the Endangered Species Act’s knowledge requirement to apply to each element of the criminal offense because, otherwise, people could be imprisoned for actions that no one would expect could result in such harsh punishment.

The crime of taking an endangered species sweeps in an endless list of traditionally lawful conduct. Building a home, plowing a field, going for a jog, and driving a car could all unintentionally cause take without the violator having any reason to think that her actions may expose her to criminal penalties for her innocent activities.

Admirably, the Department of Justice has resisted WildEarth Guardians’ efforts to expand the criminal law just as strongly as PLF has. Although we are usually on opposite sides, this is a case where the government deserves credit for doing the right thing and standing up for the values of our Constitution.

If you’d like to know more about PLF’s fight against overcriminalization, check out my FAQ on the policy at the center of this case, my law review article explaining our position in more detail, and our case page.