Today, PLF filed a petition against the Florida Fish and Wildlife Conservation Commission (FWC) on behalf of William Thomas, claiming that the FWC is stepping beyond its statutory authority in its newly proposed rule regulating boat speeds in Pinellas County. Thomas, a retiree and boating enthusiast, lives in Indian Rocks Beach near two manmade basins that are connected to the intracoastal waterway. The two basins are popular for recreational boating, waterskiing, and jetskiing.  But the FWC is threatening Mr. Thomas’s recreational use, proposing to turn both into slow zones.

The FWC started to evaluate where it should institute slow zones in Western Pinellas County waters (where Indian Rocks Beach is located) in response to U.S. Fish and Wildlife Service demands. The Service said it would withhold new dock permits until the FWC imposed slow zone regulations to areas frequented by manatees.  State law allows the FWC to impose slow zone regulations where manatees are “frequently sighted” and where the best available science shows that they inhabit the waters.

Last year, when evaluating miles of waters in Pinellas County, FWC staff decided that it should not regulate the two basins near Mr. Thomas’s home, because “documented manatee use was relatively low in both areas compared to the rest of the area.”  In fact, in the FWC’s 28 aerial surveys of manatee use in Pinellas County, no manatee was ever seen in the Northern basin, and only one or two were seen in the Southern basin. 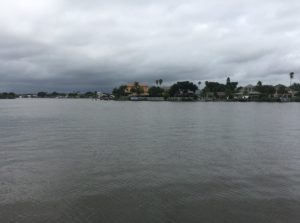 Unfortunately, the FWC decided to ignore its own science, when the City Commission for Indian Rocks Beach asked the FWC to regulate boat speed in both basins. The City Commission’s request had nothing to do with manatee safety. It was based on a political determination: the City Commission didn’t want more boat traffic coming into their neighborhood.  Even though the City offered no manatee-related scientific basis to support its request, the FWC decided to modify the proposed rule anyway. On July 23, 2015, the FWC announced its intent to impose severe speed restrictions on both areas, every year from April through October. By doing this, the FWC ignored boaters’ rights, and the Manatee Sanctuary Act, which says that the FWC should not “unduly interfer[e] with the rights of fishers, boaters, and water skiers using the areas for recreational and commercial purposes.” The FWC also ignored the rule of law by stepping beyond its legislative authority. And regardless of what you think of recreational boating, we should all want government to obey the law.