PLF joins defense of Jack LaPant, a farmer sued for plowing his farm

Today Pacific Legal Foundation joins the defense of Jack LaPant, a Northern California farmer whom the United States government is suing in federal court under the Clean Water Act, for plowing his farm without a permit from the Army Corps of Engineers.

The government’s case is at odds with the text of the Clean Water Act:

the discharge of dredged or fill material from … normal farming … activities such as plowing … for the production of food … is not prohibited or otherwise subject to regulation [by the Army Corps permit program]. 33 U.S.C. § 1344(f)(1)(A).

Mr. LaPant certainly plowed his property, to grow wheat. No reasonable prosecutor would argue that plowing to grow wheat is not a normal farming activity. Under an ordinary reading of the Clean Water Act, Mr LaPant was not required to get a permit from the Army when he plowed his farmland starting in March 2011.

To be sure he was following the law, Mr. LaPant even consulted with multiple federal agencies before he bought the property or started farming it, and was told he could do so without further approval from them.

After all that, the federal government is now suing Jack for millions of dollars, alleging that he needed a Clean Water Act permit from the Army to plow his land, despite what the law says.

We are confident that when the jury in this case hears the evidence, Mr. LaPant will be vindicated, and we applaud him for courageously standing up to the abusive treatment he is getting from his own government. 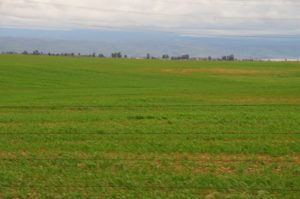 Jack LaPant’s wheat crop, growing in March 2012, for which our federal government is threatening him with millions in penalties.