We previously reported our appeal to the Ninth Circuit in the Duarte Nursery case. Today’s update is that the Justice Department has asked the Ninth Circuit to dismiss the appeal, which we oppose. This is part of the Corps of Engineers’ ongoing effort to avoid responsibility for its retaliation against Duarte Nursery’s exercise of its First Amendment rights to petition government.

The trial court has already ruled that Duarte Nursery has alleged sufficient facts to establish that the Corps of Engineers, and the Justice Department, unconstitutionally retaliated against the company for exercising its First Amendment right to sue the government. In asking the court to dismiss the retaliation claim on procedural grounds, the government conceded the factual truth of the claim, and has never rebutted the extensive evidence of retaliation that PLF has produced on Duarte’s behalf. 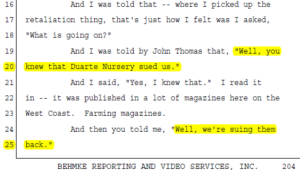 Justice Department to Witness: “We’re Suing Them Back.”

The government argues that our appeal should be dismissed because there are other issues in the case that are still before the trial court in the case, and the ordinary rule is that you can only appeal after a final decision of all issues in a case. But, the dismissal of the retaliation claim is one of a special category of rulings that can be immediately appealed, under the “collateral order” doctrine, because waiting till the end of the case would prevent an effective appeal. In this case, Duarte Nursery’s First Amendment claim would prevent the government from proceeding with its retaliatory Clean Water Act case against the company. The trial court’s dismissal of the retaliation claim on technical grounds (specifically, the erroneous view that the government is immune from such claims) requires Duarte Nursery to face trial on the retaliatory Clean Water Act. If Duarte has to face the retaliatory prosecution in order to get appellate review of whether it can prevent that prosecution, the appeal is worthless. Thus, the court of appeal is able to hear this particular appeal now, before the retaliatory trial goes forward.