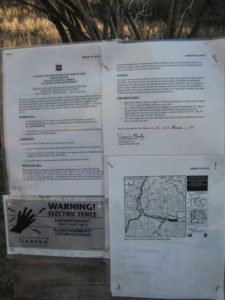 Before making a decision, most organizations take into account the costs and benefits of a proposed action, and will change course if the costs outweigh the benefits. Unfortunately, the federal government takes a different approach, even when the law requires it to account for the costs of its decisions. Today, PLF, on behalf of the Northern New Mexico Stockman’s Association and the Otero County Cattleman’s Association, sent a 60 day notice of intent to sue letter to the Department of Interior and the U.S. Fish & Wildlife Service, informing the agencies that they cannot ignore the significant economic impacts of their decisions.

The ranchers that are members of the two organizations have been ranching land in New Mexico for generations. In fact, many members of the Northern New Mexico Stockman are part of the historic Hispanic Ranching Families of New Mexico, whose histories date back to the original founding of the livestock industry in North America. These ranchers own water rights related to their livestock grazing, but their history and livelihood are now at risk.

At issue is the critical habitat designation for the New Mexico Meadow Jumping Mouse, a small rodent found mostly in New Mexico. In 2014, the Fish & Wildlife Service listed the mouse as endangered under the Endangered Species Act. Two years later, the Service designated critical habitat for the mouse, which includes many of the streams and creeks used by the ranchers’ cattle.

The designation threatens the ranchers’ access to water sources, even in areas where the mouse is not found. In Otero County, the Forest Service has put up electric fences to prevent access to streams and creeks. The Fish & Wildlife Service has also stated that these ranchers may have to reduce the number of cattle grazed in the future because of the critical habitat designation.

In total, the Service estimated that the designation will lead to about $20 million in added regulatory costs. As explained in the notice of intent to sue letter, that number vastly underestimates the costs of the Service’s actions. But even taking that number as true, the critical habitat designation has had (and will continue to have) a significant economic impact on ranchers in New Mexico.

It is clear that the Service arbitrarily designated critical habitat, without giving careful consideration to the costs, or benefits, of its actions. The ranchers of the New Mexico Stockman’s Association and the Otero County Cattleman’s Association have to live with the consequences of the designation, even though the mouse is not present in many of the areas designated as critical habitat. If the Service had acted reasonably, it would have excluded at least some areas of the designation. Instead, the Service ignored the requirements of the ESA and adopted an unlawful decision.

The Service has 60 days to correct that decision. If it does not, the ranchers are ready to sue.