The government shouldn’t be able to force you to say things you don’t want to say. When the State compels speech for no good reason, Americans may call on the First Amendment for help. First, call PLF. Three weeks ago, we filed a comment pointing out the First Amendment problems with the FDA’s menu labeling rule. This week, we submitted this letter on the Department of Agriculture’s plans to mandate GMO labeling. 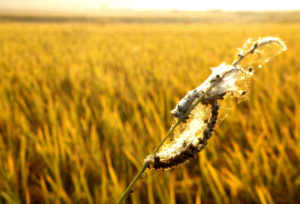 to speak. When the government wants to force you to carry its message, it must demonstrate that doing so directly advances a substantial interest (e.g. protecting public health). That’s why the government could require Mars to disclose the presence of peanuts in its Snickers bars. Peanuts, shellfish, and other allergens could make consumers ill or worse.

But that’s also why the First Amendment doesn’t allow the government to enforce its GMO labeling law. The World Health Organization, American Medical Association, and many other organizations agree that GMOs pose no distinct risk to human health. On the contrary, genetically engineered foods, like Golden Rice, can fight disease in impoverished parts of the world, where nutritional deficiency is a serious issue. GMO products are also more affordable, thanks to benefits like increased crop yields and resistance to disease, pests, and drought.

What’s more, an unconstitutional GMO labeling requirement will hit small businesses the hardest. Large companies can afford to pay quite a bit for labels. Many already have. General Mills proudly displays “not made with genetically modified ingredients” on boxes of Cheerios. Campbell recently decided to disclose the presence of GMOs in its soup. At the same time, both companies acknowledge that there is broad scientific consensus that genetically modified foods are safe. Yet small businesses are less able to pay these costs, which serve no good purpose. Fortunately, PLF is accustomed to representing small businesses and fighting for their constitutional rights.