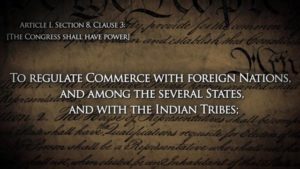 Are private custodial proceedings Commerce with an Indian Tribe?

PLF filed this friend of the court brief at the Supreme Court today, urging the Court to take Goldwater Institute‘s challenge to the Indian Child Welfare Act. In their petition, two Indian children are asking the Supremes to review an Arizona Court of Appeals decision that applied the Indian Child Welfare Act, or ICWA, to their private “termination of parental rights” proceeding. The children were trying to sever their non-Indian mother’s parental rights so they could be adopted by their father and his new wife.

An Arizona trial court had found that the mother had abandoned her children under Arizona law, and that the severance would be in the best interests of the children. For children of any other race, this would have been the end of the matter, and the mother’s rights would be terminated. But because the two children are eligible for tribal membership, the court held that ICWA required the father to make “active efforts” to preserve the family, and that those efforts were shown to be unsuccessful.

We pointed out to the Court that Congress only has limited powers under the constitution. The “Indian Commerce Clause” allows Congress to regulate “Commerce . . . with the Indian Tribes.” A private, state-court proceeding is not connected to any Commerce with an Indian tribe. The Court has wrongly allowed congress to assert “plenary power” over all Indian affairs, and we think it is time to revisit that precedent.

But whatever power Congress has to regulate Indian affairs, it shouldn’t be allowed to do it in a way that conflicts with the Equal Protection principles contained within the Constitution. A law that uses “blood quantum” to determine whether or not a child is granted the protections of state law is discriminatory, and it must be reviewed under strict scrutiny.

Reversing the shameful past treatment of Indian children at the hands of state and private institutions is a compelling governmental interest. But when government wants to use race as a proxy to treat people differently, it must narrowly tailor it. ICWA instead treats all Indians alike, regardless of their tribal affiliation or involvement. And in trying to protect Indian tribes, it denies Indian children of the “best interests of the child” standard available to every other American child of every other race.

We think the Court should take a fresh look at ICWA, and reaffirm both that our Congress is one of limited powers and that all discriminatory laws must be held to the high standard of strict scrutiny.