Today, the U.S. Fish and Wildlife Service finally announced it is downlisting the wood stork from endangered to threatened status. This comes after years of arm-twisting by PLF and 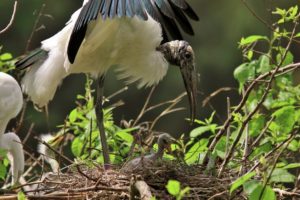 its client, the Florida Homebuilders Association, to get the Fish and Wildlife Service to abide by its statutory duty to review species on the endangered and threatened lists, determine whether they are still in danger, and act accordingly.  This is par for the course.  It seems threats of lawsuits are the only way to get the FWS to downlist a recovered species.  Skeptical? Consider our history with the wood stork:

(1) In 2005, PLF filed a lawsuit on behalf of the Florida Homebuilders Association, because the FWS had failed to conduct statutorily required status reviews for 89 species, including the wood stork.  The wood stork’s status review was almost a decade overdue.  In 2007, the PLF won that lawsuit, requiring the FWS to conduct the reviews for the 89 species according to an agreed upon timetable.  The subsequent status review of the wood stork resulted in the FWS’s own experts recommending that the FWS downlist the wood stork from “endangered” to “threatened.”  (2) After the Service failed to act on its own expert advice, PLF filed a petition in 2009 on behalf of the Florida Home Builders Association.  (3) The Fish and Wildlife Service failed to acknowledge the petition with a legally-required finding, so we threatened a lawsuit in 2010.  The FWS asked for more time, we obliged, and a few months later they issued their legally-required finding that our downlisting may be warranted.  That triggered a requirement under the Endangered Species Act that within 12-months, the FWS gather information, and decide whether data supported our petition.  (4) After 15 months had passed (three months longer than required by law), the FWS had still not made the legally required finding, so we sent a new 60-day notice that we would file a lawsuit if they did not act according to law.  At the end of the 60 days, the FWS asked again for more time.  (5) We obliged and waited until November 2012 before when we renewed our threats of filing a lawsuit.  One month later, the FWS issued its proposed rule 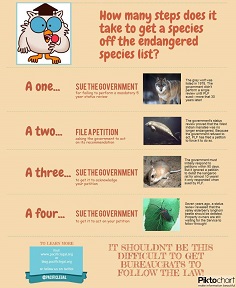 to downlist the wood stork.  (6) Under law, within one year, the FWS must act on that proposal or announce why it will not. They did nothing, that is, until we renewed our threat to sue.  This spring, the FWS and Department of the Interior received our 60-day notice that we would file a lawsuit if the FWS did not act in accordance with the law.  A few months later, lo and behold, they’ve finally acted!

It is unfortunate that FWS regularly disregards federal law when it comes to downlisting recovering species.  Threatened species, after all, enjoy many or most of the same federal protections as endangered species.  But for PLF and our clients, the downlisting matters because it puts everyone on notice that the species is recovering and soon may not warrant the invasive federal protections of the Endangered Species Act.  Remember, the ESA allows the federal government to fine and put people in prison for even accidental crimes.  A person need not even hurt an endangered species to get charged with a crime under that law.  That’s why we take downlisting seriously.  Moreover, it is important that we continue to require the government to abide by the law.  After all, if the government can’t be trusted with a little thing like reclassifying a recovering species, then how can it be trusted with bigger responsibilities?