Protecting your home v. letting it crash into the sea (part 2)

In a post last month, I described my trip to the northern coast of Massachusetts to meet with municipal officials and neighborhood association leaders who would be affected by some potential new coastal regulations that present serious concerns for property owners. I also offered oral remarks at a hearing of the Massachusetts Coastal Erosion Commission regarding its preliminary report on these issues in January.

The Newburyport, MA Daily News later published this PLF guest commentary on the matters at issue for Massachusetts coastal landowners. As we explained to the coastal residents:

The future stakes for your communities are great, including whether part of them (and others along the Massachusetts coast) will be consumed by the sea or whether measures may be taken to protect them, both physically and economically.… Will [landowners] along the Massachusetts coast be able to protect their homes, businesses and city property, or will the commission and other commonwealth agencies try to justify regulations that make it harder for them to defend their property? The [Department of Environmental Protection’s] attempt to ban private protections is worrisome, especially since DEP officials occupy prominent seats on the commission and its working groups. Many of the recommendations in the draft report raise additional concerns.

This week we sent more detailed written comments to the Massachusetts Coastal Erosion Commission, which included analysis of the Commission’s draft report and some 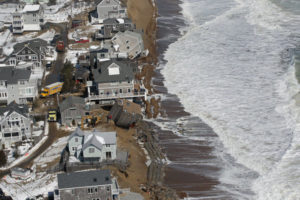 suggestions for its improvement. We told the Commission it needed to acknowledge at least the most obvious protections for private landowners in both the Massachusetts and United States Constitutions. (Naturally, we provided some helpful citations to the constitutional provisions and federal and state court decisions that were most on point.)

We also explained our many concerns with the Commission’s draft report and its outline of regulatory proposals for further study. Some of those proposals, including buybacks, rolling easements, and potentially excessive setbacks, had more to do with a “retreat from the coast” philosophy of those who believe there is something wrong with private ownership or development of coastal property than the Commission’s statutory mandate to make recommendations that would help municipalities and private landowners better protect their property.

Although we noted some of PLF’s successes in battling state coastal authorities when they violated private property rights, we ended with an offer of assistance:

As it goes through the process of evaluating its next steps in combating coastal erosion, PLF strongly urges the Commission to respect and enhance the rights of coastal landowners to enjoy and protect their property.  In that regard, we would be happy to speak with individual commissioners and Commission staff to discuss these issues further and provide advice on identifying those win-win approaches to these interesting and important issues.

PLF prefers to convince government agencies to respect property rights in the first instance. Yet we’re not shy about suing on behalf of appropriate clients when government crosses the line. Let’s hope the Massachusetts Coastal Erosion Commission and other Massachusetts agencies work to enhance protections for property rights rather than waste money and resources on proposals that violate them.