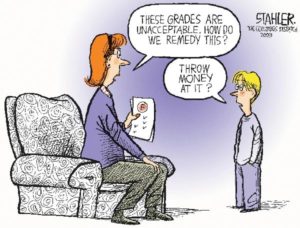 In the recent confirmation hearing held for Betsy DeVos, President Trump’s pick for Secretary of Education, Democrats fulminated over public school funding. “Can you commit,” Senator Patty Murray asked, “that you will not work to … cut a single penny from public education?” Devos did not commit. Nor should she. After all, bullheaded policies have proven time and again that increased funding–without further reforms–does not improve public school outcomes.

Policymakers too often zero in with myopic zeal on public school funding. But would increased funding actually fix things? For example, in 2009, New York City had over 700 teachers so unsuited to teaching children that the city kept them out of the classroom. But those teachers still slurped from the public payroll. Fully salary. Full benefits. No teaching. These “teachers” would sit all day in “temporary reassignment centers,” doing nothing to the tune of about $50 million in salaries and benefits a year. That doesn’t include the costs of paying for substitutes and the facilities for the reassignment centers. The Mayor tried to oust the teachers, but tenure laws and teacher union bulldogs blocked him. Who thinks that shoveling more money at NYC schools would fix this problem?

Broader research indicates that the NYC anecdote is no outlier. The ratio of public school employees to students doubled between 1950 and and 1993. Funding and staffing increased dramatically during this time period. Student achievement, though, stagnated.

The Department of Education’s data tells the same dismal story. Between 1950 and 2009, the number of K-12 students grew by 96 percent. The number of full-time school employees ballooned by 386 percent. That’s a hire rate four times faster than the growth in student population. We should see some stellar improvement in student outcomes, right? Wrong. No improvement. Breaking down the data may hint at why. During that period, teaching staff grew by 252 percent, while administrators and other staff grew by 702 percent. In the 90’s, before this trend got even worse, public school advocates warned: “educational bureaucracies become endlessly expanding financial sinkholes that eat up resources and create only mischief and red tape.” Who thinks giving more money to these folks will fix things?

And yet the mantra slaves on: public schools need more money. Imagine your college-age son comes back every semester and says, “I need more money for school.” For awhile, you fork it over. But you do some investigating. You learn that your son is flunking most of his classes. All that money you give him for food and board goes to a new drug habit. When he shows up again to ask for money, you confront him. Then he says, “I know, right?! I ditch school, I don’t even try, and I waste all your money. Doesn’t that just prove that you’re not giving me enough? How about you double it?” Who thinks giving him more money will fix things?

So what is the solution? Greater competition and more parental choice in schooling. The results of school choice are there to see. Research shows that public schools spend 93 percent more per pupil than private schools. And private schools get better results. Yet Senator Patty Murray demands of Ms. DeVos that these wasteful public schools must keep every last cent. And, of course, Senator Murray wants them to have even more taxpayer money to waste. I say these public schools should operate under the same rule that every business in the United States must live by: you can have my money when you’ve shown me you deserve it. Until then, let’s put our money–and our kids–elsewhere.