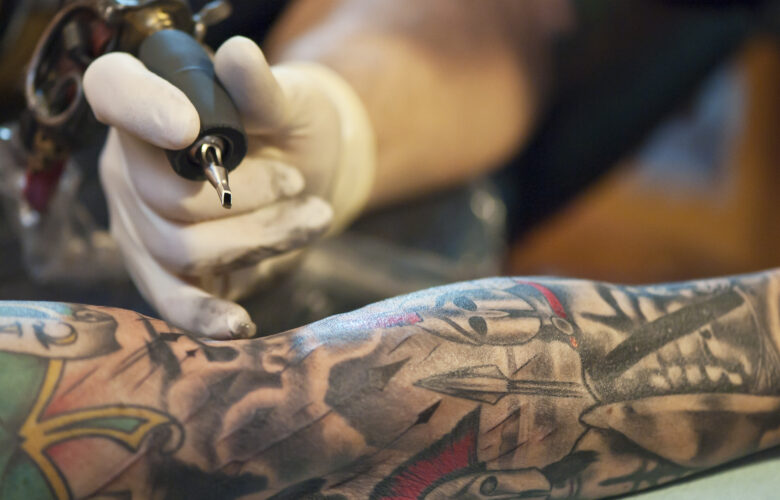 Delia Fields lost everything in the Camp Fire in 2018. After fleeing the fire in her old pickup truck with nothing but her two dogs and the clothes on her back, she sought temporary shelter in a Walmart parking lot in Chico, California. From there, she located some friends she could stay with until she was able to secure a FEMA voucher for a hotel located over an hour away in Redding. Delia had never been to Redding before, but she loaded her Belgian sheepdog, Rou, and her Pomeranian, Misu, into her truck and headed north.

Upon arriving in Redding, Delia found work in a local restaurant and started rebuilding her life. Surviving such a life-changing disaster was bad enough on its own, but even working full-time, she was barely making ends meet. Delia began to rethink her future.

In college, she had studied cultural anthropology and was captivated in learning that cultures throughout the world and over millennia have practiced body art to record events and express themselves. As she contemplated her future, she realized she wanted to become a tattoo artist.

Tattooing would allow her to help people memorialize and celebrate loved ones and key events, as well as to express themselves. Seeing as she had nothing left to lose, Delia decided it was time to pursue her dream.

She started out by training as a piercing apprentice, learning the ins and outs of body art sanitation and other safety protocols. At the same time, she began studying the technical aspects of tattooing with the help of friends in the industry. In all, Delia apprenticed for over a year and a half, mastering proper techniques and safe practices, as well as learning how to run a business.

Life was looking up.

Then COVID-19 came to Redding. When Delia’s boss-turned-friend, Shar, decided to close the shop in the wake of the pandemic, Delia began guest piercing at studios around Redding while continuing to build her portfolio of tattoo work with the hopes of opening a new studio after the pandemic ended.

Once Redding began to reopen in April 2021, Delia and Shar decided to combine their talents and open a new studio, Velvet Orange. They found an ideal location in downtown Redding and applied for the required health and safety permits with Shasta County.

The county’s health inspection of the studio found it to be flawless, but the county denied the tattoo permit anyway. The inspector informed them that all of their credentials and processes were in order, but because the city had recently enacted a prohibition on tattooing in the downtown area, the county could only issue a permit for them to pierce. Half their business wouldn’t be allowed to open.

Delia was gutted. She was also confused, as an existing tattoo studio owned by a local family with close ties to the Chamber of Commerce already operated in the center of downtown Redding. Delia’s bewilderment increased when she learned that her studio was situated a meager block within the downtown no-tattoo zone. Absurdly, from the corner of her street she could even see another tattoo studio, opened just outside of the zone.

Delia was not about to let arbitrary and irrational government decisions stymie her dreams. She decided to push back against Redding’s exclusionary approach to tattoo businesses. With the help of Pacific Legal Foundation, on September 9, 2021, Delia sent the City of Redding and Shasta County letters pointing out that it violates her freedom of expression protected by the First Amendment to arbitrarily ban tattoo businesses in downtown Redding.

In Anderson v. City of Hermosa Beach, the United States Court of Appeals for the Ninth Circuit held in 2010 that tattooing, as well as the business of tattooing, is purely expressive activity fully protected by the First Amendment to the U.S. Constitution, and that a total ban on such activity is not a reasonable restriction on speech.

After the Anderson case, tattoo artists in at least two California cities successfully challenged various municipal restrictions on opening tattoo studios. The consistent theme of those cases involved an ordinance requiring tattoo studios to be a specified distance from other properties, to address “harmful secondary effects.”

In both instances, the ordinances were held to be likely unconstitutional because the municipalities failed to produce evidence that tattoo studios actually caused harmful effects. Importantly, the courts have required municipalities to produce evidence that predates the enactment of the restriction at issue. In other words, cities cannot simply restrict where tattoo studios can operate based on prejudicial or imagined fears of what might happen. Rather, there must be quantifiable evidence of actual problems that a restriction on tattoo businesses is being enacted to solve.

In Redding, the city has pointed to no evidence to support its ban. Indeed, the no-tattoo zone was created without explanation in a mere footnote in the Downtown Redding Specific Plan Update of 2018. There is no municipal ordinance or readily available legislative history that provides an explanation.

Delia’s experience working in the local tattoo community confirmed for her that it is a safe environment. But Delia and her partner seek to operate an appointment-only business for tattooing and body piercing, so even if the city were to express concerns about crowds, late-night hours, or walk-ins receiving impulsive tattoos they later regret, those concerns—regardless of whether they’re legitimate and can’t be addressed in other ways—are absent with Delia’s business model.

To top it off, Delia and her partner are permitted to perform body piercing in their studio—Delia just can’t book tattoo appointments and put her tattoo gun and inks to work. How the expressive act of tattooing, rather than piercing, fundamentally changes the city’s view of what’s permitted is unclear.

What is clear is that Delia’s perseverance in the face of government roadblocks is just as strong as it was in the face of a life-altering disaster. Redding should immediately remove its unjustifiable restriction on tattooing, and in the meantime, Shasta County should disregard Redding’s unconstitutional ban and promptly issue a permit to Delia to allow her to get to work pursuing her dream. PLF will stand with Delia until her right to speak and practice her chosen calling in her new hometown is secure.