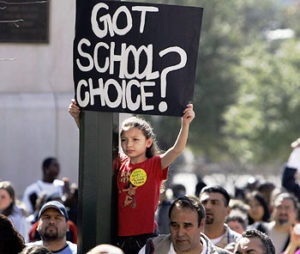 No one could find decent shoes in communist Russia. You’d get a pair with no choice regarding quality, type, or shoe size. No thought for your situation; no need to please the customer. You got what they gave you.

Our public school system faces the same basic problem. Quality and fit too often suffer because we’ve forgotten the most basic lesson of economics: competition. In a market, a failing business doesn’t last long. In our public education system, though, failing schools hang around for decades. Sadly, the rote answer to this problem is to shovel more money at the failing school. If we showered a crummy diner with taxpayer money, we wouldn’t expect to suddenly see a sticker from Zagat on their door. And sure enough, the same is true with schools. The D.C. school system is a case in point–those schools receive more money per pupil than most anywhere in the country, yet they’re among the worst.

Failing public schools need economic incentives. But they also often can’t get out of the mire even if they wanted to. Why? Because powerful teachers unions and obtuse tenure laws forestall competition for teaching positions. Take New York City for example. In 2009, New York City had over 700 teachers so unsuited to teaching children that the city kept them out of the classroom, but they stayed on the public payroll. Fully salary. Full benefits. No teaching. These “teachers” would sit all day in “temporary reassignment centers,” doing nothing to the tune of about $50 million in salaries and benefits a year. The Mayor tried to get rid of them and failed. They were armored with strict tenure laws, collective bargaining contracts, and the local teachers union. Shields up! And many still believe dumping more dollars into this system will fix things.

Public schools also have failed to respond to different learning styles and student needs. A ballerina doesn’t need a pair of size-thirteen steel-toed boots. Like the shoe market in communist Russia, traditional public schools have no incentive to conform their practices to students’ needs because the students don’t have an alternative choice. We need schools that innovate, that offer different fits and styles.

Critics argue that charter schools and other choice programs defund the traditional public schools by drawing away students. To which the answer is: Yes, so long as public schools continue to stink. The complaint is the cure. This worry also seems to rely on the backward notion that traditional public schools deserve our support for their own sake. But those schools exist to serve our children. If they fail to do so, they should lose our loyalty, our money, and our business.

Some critics also point to charter school closures as evidence of their failure. Again, this is a feature, not a bug. If only the failing public schools that have plagued us for decades had to shut down, too! Such closures represent a normal trait of a healthy market–a market that punishes failure and rewards success.

But what about the data? Conflicting statistics exist about the success of charter schools. Plenty of excellent research indicates that charter schools improve student outcomes. But even if the data were lukewarm, two important caveats deserve attention. First, a major point of charter schools is to improve traditional public schools by generating competition. To test the success of charter schools, therefore, we need to also consider whether overall student outcomes in the public school system, including traditional and charter, have improved in an area with successful charters. Second, new markets always face growing pains. A short slice of time won’t tell us much. The real test is the trajectory–are charter schools getting better over time? The research indicates that the answer is yes.

Some critics seem outraged at the suggestion that traditional public schools need competition to improve, as if this somehow impugns the characters of hardworking public school teachers across the country. But school choice relies on a basic principle of economics. We all do better when pressed to compete. As Adam Smith said long ago, “It is not from the benevolence of the butcher, the brewer, or the baker that we expect our dinner, but from their regard to their own interest.” This isn’t a stony concession to greed. It is a recognition that we are most likely to get good work when we appeal to someone’s self-interest. Public servants aren’t above that reality.

Schools are more important than shoes. The fit, the quality, the specific need. We must get those things right. We have no shortage of choices when it comes to variety and quality of footwear. Shouldn’t the same be true for our children’s education?