Today, the Department of Interior and Secretary Zinke announced the conclusion of an extensive, public review of national monuments. The agency has not disclosed its recommendations for individual monuments, which will be made public after the President reviews them. But the report leaves no doubt that past Antiquities Act abuse has been a serious problem and that President Trump has the authority to modify existing monument boundaries, including significant reductions in size if necessary or appropriate to comply with the text and purpose of the Act.

If the President follows through on recommendations to modify, reduce, or revoke any monument, he will be on solid legal footing. Scholarship from Pacific Legal Foundation’s Senior Fellow in Constitutional Law Todd Gaziano and UC Berkeley Law Professor John Yoo shows that the President has wide discretion to adjust the boundaries of existing national monuments—or revoke them entirely. Shortly after their study was released, President Trump issued an executive order calling for Interior to review 20 years of Antiquities Act abuse and make recommendations whether to change any of the 27 recent monuments, each of which cover more than 100,000 acres.

Gaziano’s and Yoo’s research confirms that the President has authority to significantly reduce or completely revoke prior monument designations, and he has the legal obligation to revoke a monument if its original designation violated the Act and there is no way to cure the violation short of revoking the monument. News reports indicate that Interior has not recommended any monument revocations, but the President retains the authority to expand on Secretary Zinke’s recommendations with his proclamations under the Act.

The Rise and Rise of Antiquities Act Abuse

Antiquities Act abuse has been on the rise in recent years, with Presidents declaring more and ever-larger monuments in defiance of the Antiquities Act’s limit that designations must be “confined to the smallest area” compatible with protecting the object for which the monument is designated. President Obama broke the record for the number of national monument proclamations he issued and the millions of acres he locked up within them. In total, he added more than 550 million acres to monuments, more than all previous Presidents combined. The data leave no doubt that Presidents Clinton, Bush, and Obama engaged in unprecedented Antiquities Act abuse. 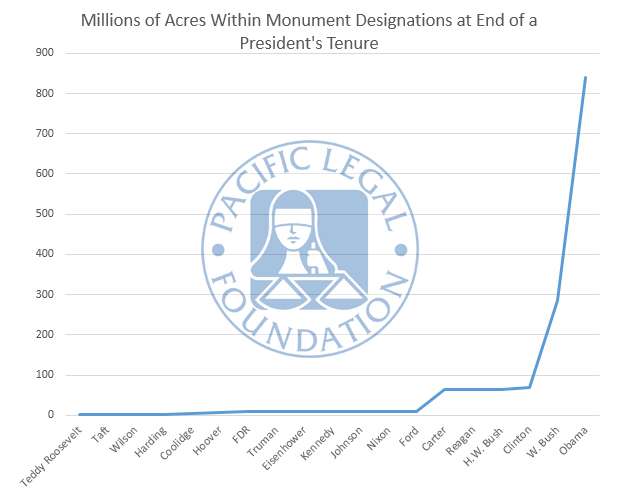 “The previous three Presidents brazenly violated the text and spirit of the Antiquities Act. They ignored Congress’ requirement that monuments be the smallest area compatible with protecting antiquities, often also ignoring local input and state concerns. Presidents Bush and Obama also mocked the Antiquities Act’s limitation that monuments can only be designated on federal ‘land’ by designating huge ocean monuments,” PLF Attorney Jonathan Wood said. “This review has been sorely needed and the Department of Interior’s clear endorsement of the President’s power to modify these monuments is a positive sign that it takes Antiquities Act abuse seriously.”

Although no President has revoked a national monument before, 7 of the 16 presidents who have issued monument proclamations have shrunk existing monuments, sometimes dramatically. According to Gaziano and Yoo’s study, President Taft reduced Navajo National Monument by nearly 90% in 1909. Presidents Taft, Wilson, and Coolidge collectively removed more than 300,000 acres from the Mount Olympus monument. That historic practice confirms that Presidents have an implied power under the Antiquities Act to revoke or shrink monuments.

Pacific Legal Foundation Litigation Director Jim Burling applauded the review. “President Trump’s acknowledgment of his predecessors Antiquities Act abuse and decision to order a review of large monuments is a welcome sign to all who care about the rule of law. PLF has been at the vanguard of challenging illegal monuments and defending the President’s power to reconsider existing, abusive monuments.”