Should existing businesses have the power to veto new enterprises?  Nevada thinks so.  We don’t.

Ron and Danell Perlman are the owner-operators of Reno Tahoe Limousine, based in Reno, Nevada.  They own seven limousines that they use for trips within the state, and an additional eight limousines that that they use for trips between California and Nevada.  Because of their success in the Reno area, they’d like to move the eight vehicles that they use for interstate trips over to their Nevada-based fleet.  But their current license only allows them to operate seven limos within Nevada.  If they want to expand their Nevada business, they have to ask the government and their competitors for permission first. 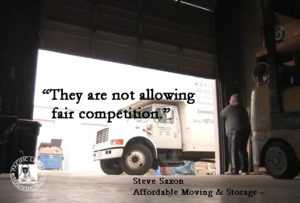 In order to start or expand a transportation company in Nevada, you have to obtain a Certificate of Public Convenience and Necessity.  But any time you apply for a Certificate, existing businesses can protest your application.  Your future competitors need not allege that you present any health or safety risk to the public.  Instead, they can protest simply because they don’t want to compete.  That protest triggers an expensive and time-consuming government hearing in which the applicant must prove to the agency that its business is “necessary and convenient” to the public, and that it won’t compete with existing companies.  Because this requirement is often impossible to satisfy, the process has been sometimes been called the “Competitor’s Veto.”

Today we challenged Nevada’s Competitor’s Veto law in court on behalf of the Perlmans and California-based father and son team Steven and Patrick Saxon. Steven Saxon started his moving business, Affordable Moving and Storage, in Sacramento, California, and his son Patrick wants to open a branch in Reno.  But the Competitor’s Veto law prevents them from growing their business on the basis that they will compete with other moving companies.

We’ve challenged these laws in Oregon, Missouri, Montana and Kentucky—and just last year a federal judge struck down the law as it applied to movers in Kentucky because it was not in any way related to protecting public and safety.  Applicants were denied Certificates despite their qualifications.  The law operated solely to protect existing businesses from competition, and that’s not a legitimate public purpose.

It’s bad enough that in many industries, you have to ask for government permission before getting a job.  For example, before it was repealed, a Louisiana law required people to get a license before arranging flowers.  Or in Nebraska, you have to get a real estate broker license before advertising homes that are for sale by owner.  In such cases, the risk of unlicensed work harming the public is fairly low.  But Competitor’s Veto laws do not even purport to have any relationship to the common good.  They exist solely to protect existing businesses from legitimate competition.  This restricts supply, drives up prices, and prevents new and innovative products from coming to market.  That’s not only unfair, it’s unconstitutional.

For more on the case, read a litigation backgrounder here.