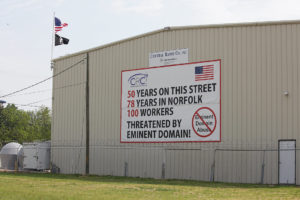 On Monday, the Supreme Court ordered three federal appellate courts to reconsider their decisions upholding sign restrictions in light of its recent decision in Reed v. Town of Gilbert. The Court emphasized in Reed that government regulation of speech is content-based (and thus presumptively unconstitutional) if the law explicitly “draws distinctions based on the message a speaker conveys,” such as imposing a restriction that “depends entirely on the communicative content of the sign.”

PLF filed an amicus brief in Reed that focused on this very issue. As Deborah La Fetra explains here, PLF was quite encouraged by the Court’s opinion. We will be equally interested in the resolution of the issue in these other pending cases and elsewhere. The analysis applied in all three cases, described below, contradicted this test and the Court’s order voiding these lower-court decisions provides insight into the broader application of Reed.

In Thayer v. City of Worcester, the U. S. Court of Appeals for the First Circuit essentially refused to enjoin a Worcester ordinance that barred speech requesting immediate—but not future—donations or commercial transactions. In an opinion written by retired Supreme Court Justice David Souter, the court explained that treating signs differently depending on their message does not necessarily render an ordinance a content-based restriction of speech. Rather, what matters to this court is the city’s rationale for the distinctions. Finding that the ordinance was not motivated by animus, the court concluded that it was a content-neutral restriction that did not violate the First Amendment.

The U. S. Court of Appeals for the Sixth Circuit, in Wagner v. City of Garfield Heights, similarly focused its inquiry on whether the government imposed regulatory distinctions because of content. This case was brought by a man who was prohibited from displaying a large sign in his yard that criticized a city councilmember for her support of traffic cameras and a trash tax. Noting that the ordinance did not ban non-political signs of the same size from non-residential areas, the district court concluded that the ordinance was an unconstitutional content-based restriction. The Sixth Circuit rejected this reasoning, finding that the political signs in residential areas actually received more favorable treatment, at least compared to other residential signs, because they were not subject to the single-sign limitation for non-political signs. Determining that the ordinance content-neutral, the court held that the City’s restrictions on residential signs were constitutional.

In Central Radio Company v. City of Norfolk, the U. S. Court of Appeals for the Fourth Circuit upheld a sign code that imposed size and location restrictions on political banners but not artistic banners, flags, or religious emblems. This constitutional challenge was brought by a plaintiff who protested the government’s taking of his property for redevelopment by displaying a 375-square-foot sign on his building that read: “50 years on this street, 78 years in Norfolk, 100 workers threatened by eminent domain!” Although the sign code treats signs differently depending on their message, the Fourth Circuit nevertheless concluded that the code did not impose content-based restrictions because the City provided a “clear content-neutral purpose.” Persuaded by the City’s justification that political banners are more distracting to motorists than other displays, the court upheld the sign code.

The Supreme Court’s order for the courts to reconsider these decisions indicates that the Court is serious about policing the line between content-based and content-neutral restrictions on speech. Municipalities may no longer escape strict constitutional scrutiny of laws that plainly distinguish speech based upon its content merely by offering a content-neutral justification. Rather, the take-away from Reed, as illuminated by Monday’s order, is that speech regulations will only be deemed content neutral if they are in fact content neutral on their face. Now that the Court has made clear that laws requiring the government to examine the content of the message conveyed are content-based, hopefully these and other courts will better guard against unconstitutional restrictions of speech.