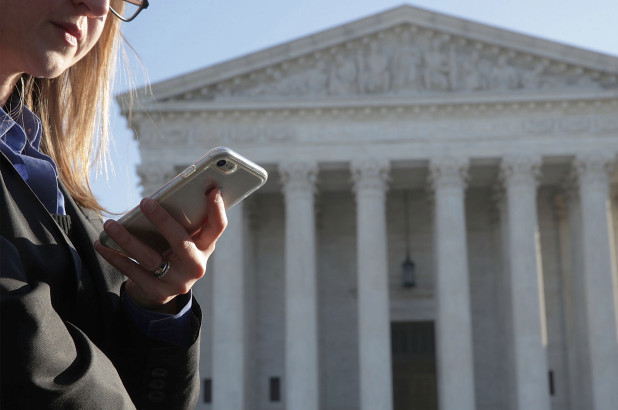 Familiarly, the Fourth Amendment provides that “The right of the people to be secure in their persons, houses, papers, and effects, against unreasonable searches and seizures, shall not be violated, and no warrants shall issue, but upon probable cause, supported by oath or affirmation, and particularly describing the place to be searched, and the persons or things to be seized.” Generally speaking, the Fourth Amendment has been interpreted to require, except for several narrowly defined exceptions, that police must secure a warrant based upon probable cause and issued by a neutral judge in order to search or seize your person or property. Beginning in the 1960s up to the present day, Fourth Amendment jurisprudence at the U.S. Supreme Court has often fallen on the side of government power at the expense of individual rights especially with the rise of unconstitutional so-called “administrative” searches.

However, the 2017–2018 term of the Supreme Court concluding this week was particularly exciting for proponents of the Fourth Amendment. In three factually distinct cases concerning Fourth Amendment protections, the Court took the side of individual liberty at the expense of attempted expansions of government power. But even more important than the decisions themselves may be the rationale employed by the Court members to reach their conclusions:

First, Byrd v. United States concerned the question of whether a driver operating a rental car who is not listed on the rental agreement has the same expectation of privacy as one who owns or is contractually operating the vehicle. The Court held that the fact that a driver in lawful possession or control of a rental car is not listed on the rental agreement does not defeat their otherwise reasonable expectations of privacy. But even more exciting than the holding itself, is the rationale the Court employed to reach its conclusion. Writing that “[f]ew protections are as essential to individual liberty as the right to be free from unreasonable searches and seizures,” and “[e]xpectations of privacy protected by the Fourth Amendment, of course, need not be based on a common-law interest in real or personal property,” Justice Kennedy writing for a unanimous Court nonetheless concludes that, “‘property concepts’ are instructive in ‘determining the presence or absence of the privacy interests protected by that Amendment.’” Even where privacy interests form the crux of the Court’s analysis, property rights still have a part to play.

Next, Collins v. Virginia centered on whether the “automobile exception” to the Fourth Amendment’s warrant requirement extends to a vehicle parked on the private property directly surrounding a private home (or in legalese, the “curtilage” of the home). The Court found that the automobile exception does not permit the warrantless entry of a home or its curtilage in order to search a vehicle. The two previous justifications crafted by the Court for not requiring a warrant to search an automobile: “ready mobility” and “pervasive regulation” of cars, are not present when it comes to the private property surrounding a home, which is considered “‘part of the home itself for Fourth Amendment purposes.’” Writing for an 8-1 majority, Justice Sotomayor concludes that “Nothing in our case law, however, suggests that the automobile exception gives an officer the right to enter a home or its curtilage to access a vehicle without a warrant.” Again, the Court’s analysis was informed by property rights.

Finally, in perhaps the most important Fourth Amendment decision of the term, Carpenter v. United States concerned whether individuals have a reasonable expectation of privacy in locational data automatically transferred to radio antennas called “cell-sites.” The Court held that when the government accesses the cell-site records of any individual, it has in fact conducted a search requiring a warrant under the Fourth Amendment. Declining to extend two previous cases concerning information voluntarily turned over to third parties, Chief Justice Roberts writes for a 5-4 majority that “that individuals have a reasonable expectation of privacy in the whole of their physical movements,” and that access to cell-site records “present even greater privacy concerns than the GPS monitoring” considered in a previous case.

But besides the sound legal footing or desirability of Carpenter’s result, even more interesting was the content of Justice Gorsuch’s dissent, which appears to further bolster the Court’s turn toward property rights as the proper basis for Fourth Amendment analysis. Decrying the later formulated privacy based approach to the Fourth Amendment , Justice Gorsuch writes that “[t]rue to [the original understanding of the Fourth Amendment], the traditional approach asked if a house, paper or effect was yours under law. No more was needed…” Lamenting that the appellant in Carpenter failed to bring a property-based challenge to the collection of cell-site data, Justice Gorsuch concludes that “Mr. Carpenter forfeited perhaps his most promising line of argument.”

The 2017-2018 term of the Supreme Court was particularly exciting for proponents of the Fourth Amendment, not only because of the results of the individual cases, but in how the Court reached its conclusions. Not only did the justices consistently bolster the requirement that the government secure a warrant prior to conducting a search, but further bolstered the related (and independent) property-based approach to the Fourth Amendment. Justice Gorsuch’s dissent in Carpenter is particularly striking, as it reads almost as an invitation to bring further property-based Fourth Amendment challenges. “Litigants have had fair notice since at least United States v. Jones (2012) and Florida v. Jardines (2013) that arguments like these may vindicate Fourth Amendment interests even where [privacy] arguments do not. Yet the arguments have gone unmade, leaving courts to the usual Katz hand- waving. These omissions do not serve the development of a sound or fully protective Fourth Amendment jurisprudence.”

Here is to hoping that Justice Gorsuch’s invitation will soon be accepted.