Blog > The gavel is down: the High Court is in session

As is its tradition, the Supreme Court began its new Term on the first Monday in October. In the weeks leading up to that day, many organizations host “preview” events (especially in Washington, DC) with leading Supreme Court advocates and other legal experts to discuss the most important cases the Court has 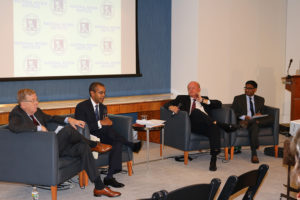 agreed to hear. The Supreme Court reporters who attend and sometimes moderate these discussions then provide their own analysis of the upcoming term to their readers. Here are some examples of stories from Robert Barnes, Richard Wolf and Lawrence Hurley, but the press will continue to report on many of the cases discussed in the preview events throughout the Term.

For the second year in a row, Pacific Legal Foundation (PLF) and National Review Institute hosted a Supreme Court preview event. Because many of the most important and interesting cases are not added to the Supreme Court’s docket until after the September “long conference,” we chose to hold our event after this date to examine some of the new cases that were just added to the Court’s docket and also look ahead to those cases the Court might still agree to hear in the coming months.

[SEE: NR’s The Corner – On the Docket by Ramesh Ponnuru]

A few of the cases discussed by our experts were Friedrichs, Harris, Fisher v. University of Texas, Evenwel, v. Abbott, Kent Recycling Services v. U.S. Army Corps of Engineers (which is a PLF case that follows up on our unanimous victory in Sackett v. EPA three years ago), and another case that presents the same issue as Kent Recycling that also was initiated by the PLF on behalf of Hawkes Company.

PLF would obviously like to extend its seven straight wins in the Supreme Court for its clients and continue to help the Court with our amicus filings. PLF will have seven petitions for certiorari pending this fall before the Justices involving cases we have originated and a similar number of cases in which we are filing amicus briefs. You can watch our preview event here and review a summary of PLF’s current or pending Supreme Court filings in the attached Litigation Status Report.