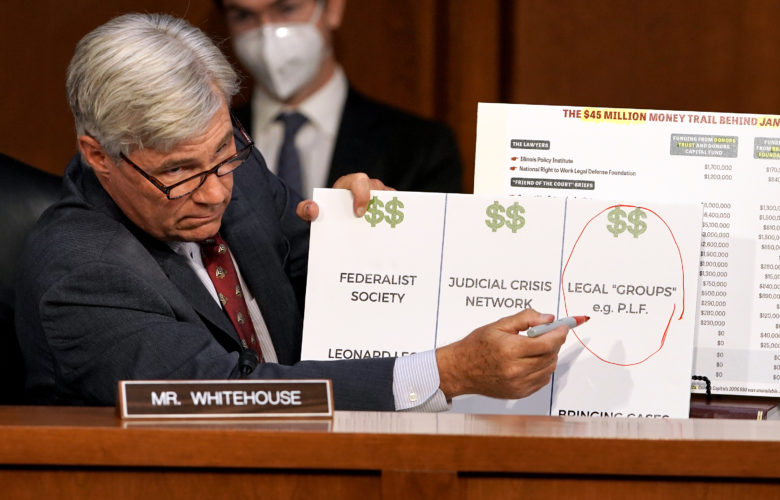 In politics, ambition is like water: You need some to survive, but too much and you’ll drown.

Watch any of U.S. Senator Sheldon Whitehouse’s speeches or interviews and you’ll see the ambition flowing out of him. He has a pointed, unrelenting anger at anyone who gets in his way, and he’s not afraid to throw the first stone, or the second, or the third.

As the junior senator from Rhode Island, Whitehouse throws most of his stones at two pet issues: climate change and the supposed evils of public interest law.

Whitehouse has also taken to the Senate floor to call PLF a “creepy front group,” pushed for new rules that would expose the names of every private donor to organizations submitting amicus briefs to the Supreme Court, and published op-eds warning the American public against the evil influences of public interest law firms that defend their clients’ rights free of charge.

It’s easy to understand why Whitehouse chose climate change as an issue: It’s a good topic to run on for a liberal, East Coast Democrat. But why the animus toward public interest law? Why would an environmentalist politician with a rising political profile decide to wage such a public war against nonprofit legal firms that provide free legal services in constitutional law and civil rights cases?

The answer might stem from the time when Whitehouse, as a rising politico, went head-to-head against one of those firms, Pacific Legal Foundation, at the Supreme Court—and lost. Big time.

That was almost 20 years ago. And it’s fair to say the senator from Rhode Island has held a grudge ever since.

In 2000, Sheldon Whitehouse was two years into his term as attorney general of Rhode Island and was setting up his political chess board for a run at the governor’s mansion. That meant looking for high-profile cases that get good media coverage. For example, he sued major paint manufacturers, saying they were responsible for lead poisonings, and he was one of the more vocal state attorneys general on health care reform.

Then in early 2000, Whitehouse was given a political gift in the form of the local property rights lawsuit Palazzolo v. Rhode Island. The case centered around Anthony Palazzolo, a tow truck business owner who bought land he intended to develop into residential homes. Citing environmental regulations passed years earlier, state officials refused to issue Palazzolo a construction permit. This significantly reduced the value of his land. The state then refused to compensate Palazzolo for the damage the rulings inflicted on his land’s value because the regulations were on the books before he owned the land. Palazzolo sued to be paid what he was owed but unfortunately lost in state courts. Faced with the decision to simply accept the reduced value to his property or fight back, Palazzolo asked PLF to take his case to the United States Supreme Court.

Normally, a case like Palazzolo wouldn’t appear on an ambitious politician’s radar; it was a straightforward property rights lawsuit and wasn’t overly sexy in legal terms. But perhaps what attracted Whitehouse to Palazzolo was the fact that it was viewed by the legal world as an easy win for the state. The fact that Rhode Island had already won the case in trial court and the Rhode Island Supreme Court meant the state’s chances for success at the U.S. Supreme Court were strong.

However, Assistant Attorney General Mike Rubin was already the lead attorney for the state on Palazzolo, having impressively argued and won the case at every level until that point. Rubin was an accomplished attorney who’d worked for the AG’s office since 1987. Whitehouse had cut his teeth as an appellate attorney for the federal government, but Rubin’s deep knowledge of the specifics of Palazzolo and the relevant legal precedents made him the best possible candidate to argue it in front of the Supreme Court.

Winning a Supreme Court case would be such a great accomplishment for Whitehouse to campaign on, though.

It’s not unheard of for an attorney general to take over a state lawsuit personally as it works its way through the courts, but if you want to win a case and set lasting legal precedent, it’s not the best strategy to bench your most knowledgeable attorney before the most important hearing.

It’s hard to tell why Whitehouse decided to take the case from Rubin at that critical point. Was it misplaced confidence? Ambition? Flat-out arrogance? Regardless, Whitehouse took over the state’s argument for Palazzolo and began preparing for the Supreme Court as best he could.

Jim Burling was PLF’s lead attorney on Palazzolo, and the opposite of Sheldon Whitehouse in almost every way possible. Whitehouse was an East Coast politician who rarely smiled, took himself very seriously, and always seemed to radiate an anxious anger. Jim, on the other hand, was a West Coast attorney (and one of the country’s leading property rights experts) at a public interest law firm who never really looked stressed and rarely lost his mischievous smile.

And come February 26, 2001, the day of the Palazzolo oral arguments, Jim was feeling good. As part of his preparation, he filled a notebook with all the questions he thought the Justices might ask during oral arguments and wrote out the answers to commit them to memory. Jim was admittedly nervous, he recalled. “In the taxi going to the Court for arguments, I saw the pillars of this massive stately building and thought to myself, ‘What the hell am I doing here?’”

But like an athlete walking into the stadium before a big game, he quickly calmed his nerves.

The only time Burling and Whitehouse ever spoke was in the Supreme Court before their arguments. Whitehouse, ever the politician, worked the room wearing a perfectly tailored—and expensive—suit, shaking as many hands as he could. When he finally made it to Burling sitting at the lead attorney’s table, he introduced himself in true self-aggrandizing politician form: “Hi, I’m Sheldon Whitehouse, I’m the attorney general of Rhode Island.” Burling was polite but sensed the aura of intimidation Whitehouse was clearly trying to put off. Regardless, he was dialed into his notes and unfazed.

Burling’s half-hour of oral arguments were a blur. As he remembers it, the Justices didn’t take it easy on him, and he faced volleys of questions about different aspects of Palazzolo’s property, the legal precedents involved in his case, and property rights law in general. But his preparation paid off and he was ready for every question that came his way.

Burling had two core arguments: First that the Constitution protects property owners’ right to be compensated if the government takes away the value of their land, and second that property owners should be allowed to defend those property rights in court regardless of when any regulation was put in place. The points clearly landed. During the arguments, Justice O’Connor challenged the other attorney arguing on behalf of Rhode Island with a question that could have come straight out of Burling’s notebook, “Think of this, there is a poor little widow woman who owns land and she can’t possibly develop it or deal with it and she puts it on the market. And somebody comes along and knows the regulation is there but says, look, that regulation is going to have to be applied in a reasonable manner. So I’m going to pay you X amount for this property and then challenge it [in court]. I mean, what’s the matter with that?” Burling couldn’t have asked it any better himself.

One of the biggest hazards when a new attorney takes over a case at the Supreme Court is the temptation to put their own stamp on the arguments. But when a case reaches the Supreme Court, you’re not allowed to raise new legal claims or argue new facts. The Supreme Court chooses which cases to hear for the impact they may have on specific legal precedents. Not only is introducing new legal claims not an option, it could actually get your case thrown out of the Court.

Whitehouse repeatedly tried raising new arguments about Palazzolo’s property during his oral arguments but learned the hard way how serious the Justices are about this rule:

Did you reference that in your brief in opposition? I mean that might have made a big difference as to whether we wanted to take this case.

Did you make any reference to the fact that there was uncertainty as to how much additional use could be made of the property?

Whitehouse’s arguments weren’t horrible, but they weren’t great, and they—paired with Burling’s impressive Court performance—turned a decision that could have been a win for the state into a toss-up. Now, like many close cases before the Court at that time, the decision in Palazzolo would most likely come down to Justice Anthony Kennedy’s swing vote.

Four months after Burling and Whitehouse delivered their arguments before the court, they finally learned which argument Kennedy agreed with: Burling and Palazzolo had won the case.

Palazzolo set an important property rights precedent that has been cited in hundreds of cases since. But your opinion of the decision varies depending on your worldview.

If you believe the government should have complete and unchallenged power to control what people are allowed to do with their land, then Palazzolo means more annoying restraints on government experts. Without the precedent set in Palazzolo, government agencies would have nearly unfettered power to regulate land, as long as regulations were on the books before a landowner purchased their property. Now, because of Palazzolo, regulators can’t simply run out the clock on property owners’ rights.

But if you believe that this country was founded on the ideal of strong property rights and protection from government overreach, then Palazzolo represents an important check on government and a powerful protection of property rights. Government might have the power to regulate private property, but it must pay property owners for any land that it takes—regardless of when it takes a property owner’s land. Palazzolo enforces that constitutional right.

After Palazzolo, Burling would continue his work as one of the country’s leading property rights attorneys and eventually lead the litigation team at PLF.

As for Whitehouse, he ultimately lost the governor’s race. But four years later, in 2006, he won the race for Senate, where he’s served ever since.

Only Senator Whitehouse can explain why he’s been obsessed with public interest law for all these years. Maybe he truthfully believes that evil “dark money” is behind every public interest law firm fighting for property rights, freedom of speech, and other individual liberties.

Or maybe, in Sheldon Whitehouse’s mind, if he makes public interest law firms like PLF look bad enough, losing to us all those years ago won’t look so bad.