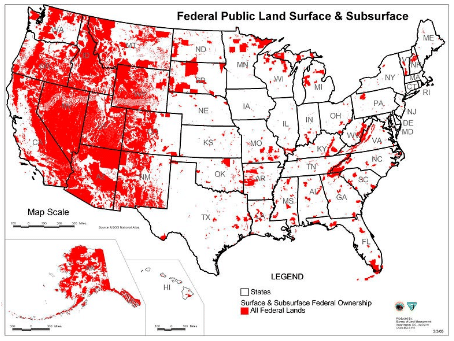 Today, PLF filed an amicus brief urging the Supreme Court to review Bohmker v. Oregon, a lawsuit challenging Oregon’s ban on certain types of mining on federal land despite Congress’ explicit encouragement of this activity. Although the case might seem like a narrow squabble over mining policy, PLF’s brief explains why it and the principles at stake are far larger.

The federal government owns roughly 640 million acres, nearly 30% of the nation’s lands. The lands are as diverse as can be imagined, from popular (and crowded) national parks to obscure, remote areas of the Nevada desert and Montana prairie. The Constitution charges Congress with managing these lands. The uses to which Congress has chosen to put them are as varied as the landscapes. Some are preserved as wilderness; some are actively grazed by cattle or buffalo; still others are mined or pumped for oil.

Congress decisions about these lands often reflect messy political compromises, leaving most everyone somewhat dissatisfied. They have generated numerous political protests. And they’ve increasingly lead to standoffs between the federal government and the states, with the latter pushing the limits of their power to frustrate Congress’ decisions.

In 2017, for instance, California enacted a law with the clear purpose of blocking Congress from selling or transferring any of the land it owns within the state. Boldly, that law proclaims “the policy of the State of California to discourage conveyances that transfer ownership of federal lands in California from the federal government.” The United States promptly sued and a federal court made short work of finding the law unconstitutionally interferes with Congress’ power to manage federal lands.

Such conflicts are possible because, although the Constitution clearly recognizes Congress’ primacy over federal lands, Congress generally accommodates state interests by allowing the states to also regulate activity on federal lands to an extent. But a lack of clarity about the permissible extent of that power has invited conflict and boundary-pushing.

Returning to Bohmker, Congress has declared certain federal lands “free an open to mining,” thus encouraging that activity on these lands. Yet the Supreme Court, in a 1987 case, held that states nonetheless have at least some authority to regulate mining on federal lands. It upheld the California Coastal Commission’s authority to impose a permitting requirement on federal mining. But it did so only in the abstract, since no particular permit or requirements were before the Court.

Granite Rock’s challenge to the California Coastal Commission’s permit requirement was broad and absolute; our rejection of that challenge is correspondingly narrow. Granite Rock argued that any state permit requirement, whatever its conditions, was per se preempted by federal law. To defeat Granite Rock’s facial challenge, the Coastal Commission needed merely to identify a possible set of permit conditions not in conflict with federal law.

However, the Supreme Court warned that, if the state went too far, it would strike the regulation as unconstitutionally interfering with federal land management. Although the state could impose some “environmental regulation,” it could not impose “land use planning” by choosing what uses would or would not be allowed on federal lands. Thus, states can “require[] only that, however the land is used, damage to the environment [be] kept within prescribed limits.” However, the Court also warned that even this type of regulation would be struck down if “so severe” as to make mining “commercially impracticable” since this too would interfere with Congress’ policy decisions.

Bohmker concerns both types of violations. Oregon has broadly forbidden certain types of mining on federal land, regardless of its environment impact. Yet, the Ninth Circuit was unwilling to enforce these limits. Instead, over a sharp dissent, a majority of the panel that decided Bohmker determined that the Supreme Court’s approach “make[s] no sense” and should be abandoned. These limits, the majority continued, would “handcuff [state] regulators,” which the judges thought unadvisable.

Whatever you think of mining, the Ninth Circuit’s decision should trouble you. Not only does it attempt to give the Heisman to Supreme Court precedent. But, by rejecting limits on state authority necessary to preserve Congress’ primacy over federal lands, it invites far more federal-state conflicts over those lands. Those conflicts should instead be worked out, politically, in Congress, as the Constitution requires.