Blog > Issues > Separation of Powers > The Supreme Court should restore federalism to its rightful place. Utah’s prairie dogs depend on it.

The Supreme Court should restore federalism to its rightful place. Utah’s prairie dogs depend on it.

This weekend, Senator Mike Lee of Utah and I had an article in the Wall Street Journal urging the Supreme Court to hear People for the Ethical Treatment of Property Owners v. U.S. Fish and Wildlife Service—PLF’s challenge to a federal regulation that frustrates the recovery of the Utah prairie dog and threatens to erode any limits on the federal government’s power.

In southwestern Utah, federal regulations are artificially pitting people against prairie dogs—to neither’s benefit. There are about 80,000 Utah prairie dogs in the region, and the species is listed as threatened. State biologists would like to move the creatures from backyards and playgrounds to public conservation lands, but that’s forbidden under the federal rules. The result of the regulations has been conflict but little progress toward lasting recovery for the species.

For years, towns like Cedar City have been stuck in what Greg Sheehan, the Principal Deputy Director of the [U.S.] Fish and Wildlife Service, has called “a quagmire of federal bureaucracy.” Washington’s heavy-handed regulations make it a crime for these Utahns to do things that the rest of us take for granted, like building homes in residential neighborhoods or starting small businesses. Cedar City can’t even protect its playgrounds, airport and cemetery from the disruptive, tunneling rodent.

The State of Utah, joined by 22 other states, filed a brief focused on the threat the decision below poses to federalism and to Utah’s successful conservation program.

The management plan built on decades of State experience monitoring and regulating the animals. As the then-Utah DWR Director (and current FWS Deputy Director) explained at the time, DWR has “been in the prairie dog business for decades [and has] as much expertise as anybody on the planet. We are not wondering how to best manage them; we have been doing it for decades.” . . . The goal was to gradually remove Utah prairie dogs from human conflict areas – where their long-term survival is doubtful – and onto preserve areas where they are unconditionally protected from take and can flourish without human interference. . . .

The State takes seriously its sovereign responsibilities to both conserve the Utah prairie dog and manage the animals’ impacts on private property and non-federal public lands. But with a few keystrokes, the Tenth Circuit’s opinion rendered those comprehensive State efforts a nullity. The court of appeals allowed the FWS regulation to displace Utah’s plan for regulating its wildlife and land use – two areas of traditional state concern. Worse still, anyone trying to implement Utah’s plan now likely would be committing a federal crime.

Our friends at the Cato Institute, joined by Reason Foundation and Individual Rights Foundation, mocked the government’s nebulous claim that the Utah prairie dog regulation can be justified under the Constitution’s Commerce Clause:

In no Commerce Clause case has this Court considered anything so worthless. The Utah prairie dog is not a marketable commodity. There is no illicit trade in prairie dog horns or hides for the government to suppress. They carry no fire-arms into school zones. Their domestic relations are none of the government’s business. Finally, they have neither purchased health insurance nor plan to do so in future. . . . 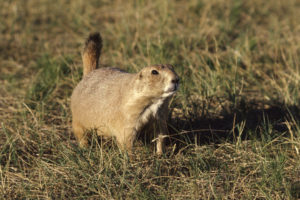 The government seeks to protect an abundant, commercially irrelevant, and wholly intrastate rodent without regard for whether such regulation has any connection to economic activity, let alone commerce among the several states. Amici wish the adorable little critters no ill will and hope that state wildlife authorities handle the population responsibly. Indeed, when given the opportunity, Utah has outperformed the federal government—but the protection of cuteness is not a congressional power enumerated in Article I, Section 8.

The ESA is widely known to have incentivized landowners to take extreme steps in order to prevent a listed species from inhabiting (and inevitably devaluing) their property. “[U]nder the ESA, economic theory and increasing empirical evidence suggest that, at least in the context of private land, land use regulations are likely doing more harm than good.” One analysis of landowner patterns in North Carolina during the 25-year period of ESA listing of the red-cockaded woodpecker found that “the ESA has led some forest landowners to preemptively harvest timber in order to avoid costly land-use restrictions,” resulting in the reduction of suitable habitat for the species on private land.

The Property and Environment Research Center’s brief argues that a return to federalism will be better for both people and prairie dogs.

State-based recovery efforts produce far better results than the one-size-fits-all federal approach of prohibiting the take of endangered species and defining “take” so broadly as to federally criminalize the relocation of a single animal. The state-led management of the Dunes Sagebrush Lizard in Texas, Oklahoma,
New Mexico, and Arizona is one recent example. Similarly, the greater sage grouse has benefited from numerous state-led recovery plans that incorporate local scientific information and flexibility.

We should know whether the case has piqued the Supreme Court’s interest by early January.