Blog > Today in history: Virginia ratifies the Bill of Rights in 1791

Today in history: Virginia ratifies the Bill of Rights in 1791

Today is the 224th anniversary of the Commonwealth of Virginia’s ratification of the Bill of Rights, the first ten amendments to the Constitution. Many of our basic civil rights are recognized in the Bill of Rights, and it would not be surprising if Americans assumed that these rights were explicitly recognized in the original Constitution. But, the Constitution did not have a bill of rights when it was ratified in 1788, and this was a point of controversy in some of the states.

The Federalist Papers, especially Federalist 84, address this question in the context of the ratification debate in New York, and explain why the proposed Constitution did not enumerate specific rights: the Framers understood these rights to be inherent in the human person, rather than conferred by the state. And, they understood these rights to be too broad to list exhaustively. If a constitution included a list, two conclusions might be too easily inferred: that the listing meant that they were conferred by the state, rather than merely recognized, and that the Constitution was not intended to protect rights absent from the list.

But the ratifying conventions in New York, Virginia, and other states, were persuaded by opponents of the new constitution that if it did not include a bill of rights, the new federal government would not be bound to respect its citizens’ natural rights. In the First Congress, James Madison introduced the legislation that would eventually become the Bill of Rights, and in his floor speech he explained the nature of the problem: adequately enumerating citizens’ natural rights without implying that the government was not bound to honor any that were not listed. His solution to this problem was the provision that became the Ninth Amendment:

The enumeration in the Constitution, of certain rights, shall not be construed to deny or disparage others retained by the people. 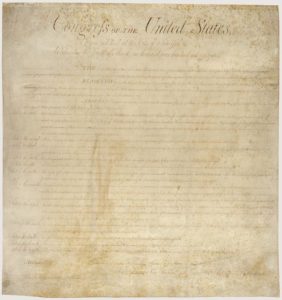 The original is getting harder to read. Do we still know that the Bill of Rights recognizes our rights, rather than creates them?