Next Tuesday, August 15, at 9:00 a.m. Pacific, at the federal courthouse in Sacramento, California, trial will get underway in the federal government’s outrageous demand for tens of millions of dollars in punishment from Duarte Nursery for plowing a field to plant wheat without permission from the United States Army. Needless to say, if the judge awards the government that much, it will be the end of the company and the jobs of its several hundred employees (none of whom had any role in this matter).

Today, The Weekly Standard published an excellent article summarizing what is in dispute in the case. The entire piece is available here, but this paragraph captures the essence of it:

The case rests on a handful of narrow legal questions, such as how much deference to afford executive branch agencies; whether ponds that are sometimes dry are really part of a “significant nexus” of “navigable waters” subject to regulation under the 1972 Clean Water Act; and if plowing a vacant field constitutes protected “normal farming.” But to farmers across the country, the case exemplifies the overreach of the regulatory state. To them, it seems like a guy could wind up paying millions in fines for the crime of planting wheat.

The court has already decided that Duarte Nursery is liable for plowing without a permit. Duarte disagrees with that ruling, and will appeal once the trial proceedings on penalty are concluded. At the penalty trial, PLF and its co-counsel intend to show the court that Duarte derived no financial gain from the plowing (the profit from the crop would be realized by a business associate), and that paying any significant penalty would cause significant job losses among Duarte’s more than 400 employees; that the plowing caused no significant environmental harm; and that Duarte has no history of Clean Water Act violations and took reasonable steps in good faith to comply with what the company understood its obligations to be at the time. The court must consider all these factors in determining how large a penalty to impose.

If ever there was a case for imposition of a nominal penalty ($1), this is the case. 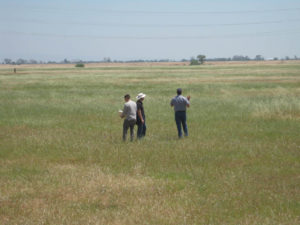 An Army employee attempts to show two Justice Department attorneys where the navigable waters on Duarte’s property are.