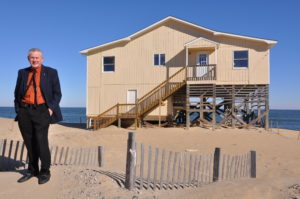 We are thrilled to report that former PLF client, Roc Sansotta, has reached a settlement agreement with the Town of Nags Head, North Carolina, to the tune of $1.5 million! Under the agreement, the Town will essentially buy Sansotta’s beachfront property and cottages, and tear them down to make the land part of the public beach. This is a great outcome, both for the Town and for Sansotta. As PLF has said all along: if the Town wants Sansotta’s beachfront property, it must pay him for it. Now, after five years of litigation, the Town is finally doing just that.

This case began when the remnants of a hurricane struck the Town of Nags Head. Sansotta, the owner and manager of several beachfront cottages, was prepared to defend his property from the elements. As with prior storms, he had his contractors on the beach, keeping the cottages’ septic tanks covered with sand, and reinforcing the structures to make sure they didn’t suffer damage. But the Town had other ideas. Under the auspices of the Town mayor—whose election platform included a promise to remove the cottages from the beach—the police forced Sansotta’s contractors to stop their work during the storm and kept them from re-entering the property. Predictably, the storm then damaged the cottages.

Sansotta originally filed suit in 2009 in North Carolina state court, challenging the Town’s scheme as an unconstitutional taking of his property, and a violation of his due process rights. The Town then removed the case to federal district court. After litigating the case for some time, the Town claimed that Sansotta’s takings claim was unripe for adjudication in federal court under Williamson County’s “state litigation” ripeness doctrine. Under that bizarre and misguided rule, plaintiffs must first litigate their takings claims in state court, before bringing them in federal court. The federal court in Sansotta’s case agreed with the Town and dismissed his takings claim as unripe.

That’s when PLF got involved. Given our history of battling the injustices that Williamson County inflicts on takings litigants, we joining local counsel Keith Anthony at Morningstar Law Group to appeal the district court’s decision to the Fourth Circuit. There, the court established a crucial limiting principle on Williamson County: where a defendant in a takings case removes the case from state to federal court, he waives the right to argue that the case is unripe for failure to litigate in state court. As such, the Fourth Circuit reversed the lower court and remanded for a resolution on the merits of Sansotta’s claims.

Once back in federal district court, PLF continued to represent Sansotta where we won several important claims on summary judgment. These include: (1) establishing that the Town had no authority to declare Sansotta’s cottages nuisances because of their location on the beach; (2) getting the fines the Town charged Sansotta for his refusal to demolish the cottages dismissed as unlawful; and (3) wining the right to have a jury decide whether the Town’s actions had caused an unlawful, temporary taking of Sansotta’s property.

PLF then handed back the reigns to local counsel Keith Anthony to handle the trial. The Town’s fear that it would lose the trial prompted it settle. As the Town’s Mayor explained: “Our Board feels that settling these lawsuits at this time is in the best interest of the town. If this had gone to a jury trial, we may have faced potential liability for plaintiffs’ attorneys’ fees and costs, along with any damages the jury may have awarded.”

Congratulations to Keith Anthony and Roc Sansotta. And we’ll give ourselves a pat on the back too for our role in helping to bring about this happy ending!