On August 23rd, we received a response from the Fish and Wildlife Service to our 60-day letter of intent to sue. It indicated that the recent lawsuits over the status of gray wolf populations in the Rocky Mountains and Great Lakes have somehow compromised their ability to move forward with the proposed delisting of all gray wolves in the lower 48. It also indicated that it is considering both legal and regulatory resolutions and “hope[s] to have a path forward regarding the Federal listing status of gray wolves later this year.”

This is generally positive, because it means that the Service has a reason for not issuing the final rule and is not simply dilatory in following the law. We hope it also means that the Service is actively working to resolve the issues so it can move forward with the plan to delist gray wolves entirely. Unfortunately, this does not give us any sort of reliable timeline to know when we can expect to see changes with regard to federal listing of gray wolves. 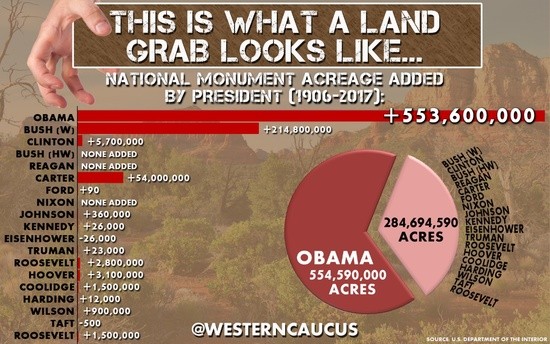 By the time he left office, President Obama locked up an astonishing 553 million acres of land and ocean into National Monuments — more than all previous Presidents combined. Shortly after President Trump took office, PLF attorneys embarked on a research project to determine whether a sitting President can undo a prior President’s monument designations. The conclusion: unequivocally yes.The law is clear: monuments must be for the smallest area of land necessary to preserve artifacts and the like. There is simply no way millions upon millions of acres are necessary to preserve any sort of artifact, and there is no authority whatsoever for monuments in the oceans. And, importantly, there is nothing in the law that prevents a President from reversing a predecessor’s unwise decisions. Because so many of the prior monument designations broke the law, it is imperative that the President reduce or revoke some of these monuments. This is especially the case when some of these monuments were shoved down the unwilling throats of the states and local communities. This week, Secretary of Interior Zinke gave the President his recommendations on which monuments to pare back. We hope these recommendations were serious and that the President will agree.

It should be noted, despite the hysterical cries from the environmental industry, reversing a National Monument designation is not somehow going to decrease public access, lead to the transfer of the land to the states (as good an idea as that may be) or allow resource companies to run wild. The intense level of regulatory and environmental scrutiny that has traditionally existed on these lands will remain.  So the for-profit environmental corporations like Patagonia and the non-profit environmental corporations like CBD should have little to fear. Not that that will stop the Armageddon-fueled fundraising frenzy from the latter. Here’s our blog post.