When free speech is silenced in middle school, it dies on college campuses

Recently, an 8th grade student in Oregon was sent home from school and suspended for wearing a T-shirt displaying boots, a helmet, and a gun representing fallen soldiers with the text “Standing For Those Who Stood For Us.” The student, Alan Holmes, wore the shirt to honor his brother, a Marine who served in Iraq.

Schools certainly may restrict speech that disturbs the educational environment or advocates illegal activities. It is well recognized, however, that schools are not allowed to ban pure speech simply because they disagree with the message. In fact, courts have held that the First Amendment may protect students who wear T-shirts with an imag 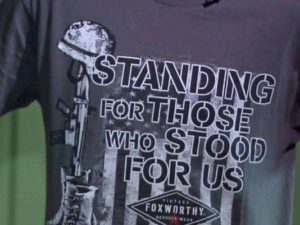 The fact that schools are quashing speech is a serious issue that cannot be ignored. Indeed, there have recently been other stories similar to Alan’s. Yet it is not surprising that there has been a spike of anti-speech policies in middle and high schools.

Over the past several years, colleges, administrators, teachers, and students have fostered the “Coddling of the American Mind.” Rather than discuss difficult subjects, students now escape vigorous dialogue by declaring that classmates are inflicting “microaggressions.” They avoid uncomfortable matters by seeking “trigger warnings.” The First Amendment has become an afterthought in instances where someone disagrees with, or is traumatized by a statement or topic of conversation.

My alma mater, UC Santa Barbara, provides several examples of the decline of free speech on college campuses. Approximately 18 months ago, Mirelle Miller-Young stole a sign from pro-life activists and subsequently assaulted one of the activists when she tried to retrieve her property. When Miller-Young was questioned by police, she defended her actions by claiming that activists’ sign “triggered” her. The police informed her that she still broke the law.

In another troubling incident, the UC Santa Barbara student Senate passed a resolution that called for mandatory “trigger warnings” for all classes. Though the resolution did not bind the school to act, it is nonetheless troubling to see students try to insulate themselves and their peers from issues that must be faced in the real world.

Before another generation of students loses the ability to speak freely on college campuses, middle and high schools must begin to protect their students’ First Amendment rights. When a student is suspended from school for wearing a T-shirt supporting our armed forces, what message does that send? There certainly may be some teachers or students who disagree with Alan’s message, but our educational system should prepare the youth to understand multiple perspectives and to critically challenge their own. When students are shielded from every uncomfortable idea, or are punished for presenting a potentially distressing statement, it is not surprising that college students expect to be protected from any mention of controversial or potentially unpleasant subject.

If we want to encourage an intellectually stimulating college environment, we must stand up for the free speech rights of Alan Holmes and other young students like him. Fortunately, some colleges have already done so. If we don’t stand up for free speech, soon enough, “College encourages lively exchange of idea” will be an Onion headline.