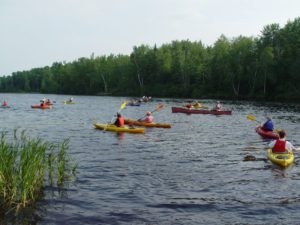 An interesting public trust case will be heard in the Wisconsin Supreme Court that has some potentially significant ramifications. Like many lawsuits, it starts with a dispute between neighboring landowners (who also happen to be brother and sister).

At issue is whether or not a landowner that owns property adjacent to a flowage (a special kind of lake in Wisconsin) may build a dock out into the flowage that will have pilings that sit on what is clearly privately owned (though submerged) land under Wisconsin law. The Court of Appeals said yes, and they used a strange expansion of the public trust doctrine to get there.

When rivers are dammed, waters rise on the land upstream of the dam, and lands that were previously dry become submerged. And submerging dry land beneath water is a taking of that property under the Fifth Amendment, which requires just compensation. In many areas of Wisconsin, rather than purchase the land outright, the government instead obtained “flowage easements.” This easement gives the government the right to submerge the property, but leaves fee title with the original landowner.

The brother and sister here own adjacent property–the sister owns dry land, and the brother owns the submerged bed of the flowage. After a family fallout, the brother demanded that the brother no longer use the submerged property. But the water above, as navigable waters, are subject to the public trust doctrine, which allows public use for boating, fishing, and recreation.

The Wisconsin Court of Appeals decision held that the sister had a right to build a pier on to the privately held land of the brother under the public trust doctrine. But the right to build a pier into the water is generally considered a right under the riparian doctrine, an adjacent landowner may build a pier onto submerged land held by the sovereign, so that they may engage in public trust uses. Here, the court has conflated the two doctrines, holding that the right to public trust uses granted the adjacent landowner a riparian right. The court denied that riparian rights were at issue, the landowner – who just happens to be adjacent – was held to have all the rights available to any member of the public.

Under this theory, any member of the public would have a right to build a pier on privately held submerged land in Wisconsin–perhaps even on land held by the sovereign. This would represent a pretty clear expansion of the public trust doctrine, and one that could even represent a judicial taking of the type Justice Scalia once discussed. The public trust doctrine has grown out of shaky foundations, and it shouldn’t be used as a catchall limitation on private property rights.