Accountability is sorely lacking in the administrative state. Unelected, unaccountable bureaucrats make decisions significantly affecting our daily lives with too little involvement from our elected officials.

The Congressional Review Act was intended to restore at least some degree of democratic accountability to the administrative process. It requires agencies to submit to Congress every rule they wish to impose on you, giving the people you elected an opportunity to oversee what federal bureaucrats are up to.

That’s the theory, at least. In practice, agencies have failed to comply with their obligations under the statute, withholding rules from Congress and thereby avoiding political oversight. Fans of PLF’s Red Tape Rollback Project will recall that this failure means that the unsubmitted rules cannot be implemented or given legal effect and remain vulnerable to Congress’ review. The Wall Street Journal’s Kimberley Strassel described PLF’s discovery of the large number of rules illegally withheld from Congress a “regulatory game changer.”

Today, PLF is challenging agency noncompliance with the CRA as the second wave in our campaign to end the unconstitutional administrative state. (The first wave challenges FDA’s violation of the First Amendment and Appointments Clause by letting a mere employee, instead of an appointed and Senate-confirmed officer, issue a regulation unconstitutionally censoring truthful speech about vaping.)

One of our CRA cases highlights the illegal implementation of an unsubmitted rule that Congress likely would disapprove if given the chance.

The Forest Service and Bureau of Land Management has adopted heavy-handed land use plans covering tens of millions of acres of federal lands throughout the west, ostensibly to protect the greater sage grouse. This controversial rule threatens the grazing rights of our client Tugaw Ranch and the livelihoods of the three brothers whose family has worked this land for decades. The Sage Grouse Rule has been an endless source of conflict since it was adopted in 2015, generating several lawsuits, congressional hearings, and an ongoing effort in the Department of Interior to reform it. But our lawsuit highlights a bigger problem with the rule—the agencies withheld this huge, burdensome, and unpopular rule from Congress. The Sage Grouse Rule is precisely the sort of rule that Congress wished to subject to democratic scrutiny and might disapprove if given the opportunity to review it. The Sage Grouse Rule must be submitted to Congress as required by the Congressional Review Act.

Our other case presents the exact opposite problem: the consequences when an agency fails to submit a good rule, subjecting it to an unnecessary cloud of uncertainty. 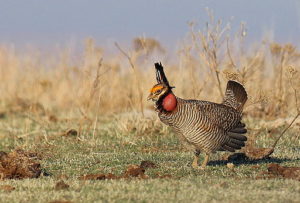 The Policy for the Evaluation of Conservation Efforts When Making Listing Decisions (PECE Rule) is a critically important and popular rule encouraging state and private conservation efforts, by allowing them to avoid the crippling regulations that could result from an Endangered Species Act listing. This is a huge incentive for collaborative conservation efforts. Our client, the Kansas Natural Resource Coalition, is an organization of county governments in western Kansas that has developed a conservation plan to protect the lesser prairie chicken. That plan relies on the PECE Rule to help incentivize property owners to participate. However, the Service never submitted the rule to Congress under the CRA. Congress would not likely disapprove of this beneficial rule if it was submitted—nor should it!—but the CRA nonetheless makes clear that the agency’s failure to submit this good rule means it cannot be lawfully in effect. This puts KNRC’s conservation efforts into an impossible bind: they must prove to the Service that their plan is certain to be implemented and effective but the Service’s own failure to submit the rule undermines the incentives necessary to achieve that certainty.

These cases are about more than just these two rules. We’re suing to vindicate the important values of accountability and the rule of law that Congress advanced through the enactment of the CRA. When we win, we’ll open the doors for others to challenge violations of the CRA, which could finally lead to the end of this illegal practice. All this litigation could be avoided, of course, if the President ordered agencies to review their past compliance with the CRA and begin sending up rules that were wrongfully withheld from Congress.

The Congressional Review Act is unequivocal. Agencies must submit every rule to Congress for review. It is similarly clear about the consequences for agencies that fail to do so—their unsubmitted rules cannot go into effect. When agencies violate this command, they do great harm to the people subject to their rules, whether the agency is enforcing a bad rule that Congress would likely disapprove or undermining the benefits of a good rule that Congress would applaud, if submitted.