Have you ever wondered what happens when a lame duck president appoints someone to a position that extends into the next president’s term?

Typically, once the new president takes office, he can remove appointees of past administrations and replace them with people he believes will advance the policy agenda of the White House.

But what happens if you’re not fired once the new president is sworn in, and you have statutory duties to perform, but career bureaucrats ignore your valid appointment?

The latter was the situation in which professors Steve Hanke and John Yoo found themselves earlier this year. Charged with performing oversight duties of the Department of Education’s (DOE) research arm, the two Trump appointees to the National Board for Education Sciences were perplexed when DOE officials suddenly stopped responding to their emails.

President Biden had not fired the professors, but unelected bureaucrats at the DOE refused to let the pair and their fellow NBES members meet and perform their oversight work. One DOE official even went so far as to question the validity of the professors’ appointments—which, in effect, was a challenge to a portion of the Supreme Court’s 1803 holding in Marbury v. Madison.

With assistance from Pacific Legal Foundation, Hanke and Yoo sued the DOE, the Secretary of Education, and the Designated Federal Officer for the National Board for Education Sciences for their failure to deliver their signed commissions, acknowledge the validity of their appointments, and call a meeting of the NBES. The DOE’s response to the professors’ complaint was due September 24, 2021.

But on September 2, 2021, President Biden removed Hanke and Yoo from their positions on the National Board for Education Sciences without explanation. The firings are significant because they affirm that the professors were, in fact, duly appointed to the NBES when President Trump signed the professors’ commissions—the legal position that PLF advanced in the professors’ lawsuit.

Notably, the firings also mean that for nine months, unelected officials at the DOE ignored repeated requests from the NBES members to call a meeting and thwarted the members’ attempts to perform their statutory duties. This is also the first time a president has removed NBES members appointed by the previous administration from the bi-partisan oversight board.

After the professors were removed from their NBES positions, PLF continued negotiations to obtain their signed commissions—proof the professors were legally appointed to the NBES for about nine months. Unlike Mr. William Marbury, whose commission was either lost or destroyed, the DOE eventually mailed the professors’ commissions and they received them in good condition shortly after their removal from the posts.

On September 22, 2021, professors Hanke and Yoo filed a notice of voluntary dismissal in their lawsuit against the DOE and Secretary Cardona. The professors’ removal from their positions reaffirmed the legal holding from Marbury that once the commission is signed by the president, the appointment is complete—but the DOE treatment of the professors for nine months sets a concerning precedent.

Unelected bureaucrats should not determine which appointees are permitted to perform their statutory oversight duties—that responsibility is left to the president.

Imagine if this practice became widespread: Unelected bureaucrats could seriously undermine the smooth transition of power between administrations by ignoring legally valid appointees for months or even years at a time, while the president could avoid political backlash for removing appointees from the previous administration.

The administrative state has metastasized to an unruly size—so much so that there’s no authoritative list of how many federal agencies exist—and must be reined in so that government actors are held politically accountable. 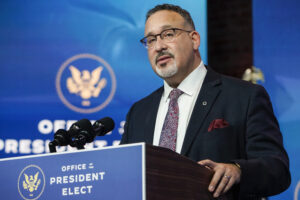