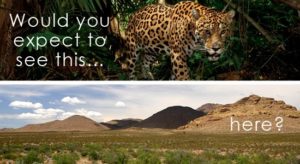 In 2014, the federal government designated thousands of acres in New Mexico as “critical habitat” for the jaguar. The designation is absurd, because as cat-lovers know, jaguars prefer the wet, tropical climates of Central and South America forests, to the dry, arid wilderness of the Southwest. The designation should also trouble liberty-lovers, because it violates the limits of the Endangered Species Act. That’s why PLF sued the U.S. Fish and Wildlife Service on behalf of New Mexico Farm & Livestock Bureau, New Mexico Cattle Growers’ Association, and New Mexico Federal Lands Council. Friday, we filed our reply brief which explains why legal precedent and the statutory text require the court to overturn the illegal designation.

The Endangered Species Act limits critical habitat to land that is either “essential for the conservation” of the species, or was “occupied” by the species when when it was first listed as endangered. No area of New Mexico qualifies. There is zero evidence that jaguars actually occupied New Mexico in 1972—not even a single track or sighting in the entire state between 1937 and 1994. Yet the government claims two areas in New Mexico were “occupied” in 1972. It’s evidence? One sighting in each area—twenty and thirty years after 1972. The government acknowledges its evidence is weak, so it also argues that these areas are “essential for the conservation” of the jaguar. But the government admits they are only “marginal” or “secondary” habitat that may never be home to breeding pairs or more than a few vagrant males. This cannot be what Congress meant when it defined critical habitat in 1978. Indeed, legislative history reveals that Congress intended an “extremely narrow definition” of critical habitat, to limit the reach of the sometimes crippling label.

How then, does the U.S. Fish and Wildlife Service defend its decision to call parts of New Mexico critical habitat for the jaguar? It’s main argument is that courts shouldn’t worry about what Congress intended when it wrote the Endangered Species Act and should simply defer to the federal agency’s interpretation. Environmental groups who intervened in the case make an even more extreme argument, claiming that almost any kind of habitat qualifies as “essential” to a species except, for example, “land that objectively could never contribute to the conservation of a species.” This is an Orwellian rewriting of the statute, in which “essential” is twisted to mean “possibly useful, some day, maybe.” The government and intervenors also argue that it doesn’t need evidence that the area was occupied, but can instead guess that they might have lived there, because jaguars are “evasive.” But the Act requires actual evidence to designate an area critical habitat. The absence of evidence does not magically become evidence that jaguars lived in New Mexico in 1972 just because the government says so.

Our reply brief explains why the government and intervenors’ arguments violate precedent and Congressional intent. The U.S. Fish and Wildlife Service construes terms like “essential” and “occupied” beyond recognition. It also violates the Act’s requirement that government make at least a rudimentary finding about the point at which the jaguar will no longer qualify for the federal government’s protection. The government never even ventured a guess about how many jaguar exist or how far we have to go to recover the species before labeling thousands of acres critical habitat. (WWF Global estimates 15,000). How can the government identify habitat as “essential to conservation” efforts, if it doesn’t have some idea about what is necessary to remove the jaguar from the endangered species list? It can’t, so the designation should be overturned.