For years, Edward Poitevent and his family were forced to fight for their land. But now, the Pointevant’s are winners in their long-running national battle over property rights and the reach of the Endangered Species Act.

Edward’s case, Weyerhaeuser v. U.S. Fish and Wildlife Service, was the infamous “phantom frog” case. It centered around the federal government’s abuse of the Endangered Species Act through critical habitat designations. Last year, the U.S. Supreme Court unanimously ruled in favor of Edward and his family. But Edward’s victory is more than just a win for one client; it’s a big win for private property rights and government accountability.

The Poitevent family has owned timber-rich land in Louisiana since the 19th century. In the 1990s, Weyerhaeuser Company acquired a lease of the Poitevent property for its timber operations, and Weyerhaeuser also purchased a small piece of the land. 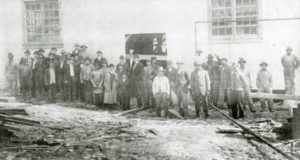 Workers at the Poitevent family mill, circa 1900.

However in 2012, under cover of the Endangered Species Act, the U.S. Fish and Wildlife Service (FWS) designated more than 1,500 acres of the Poitevent property as a “critical habitat” for the endangered dusky gopher frog. But there was a big problem with that “critical habitat” designation: no one had spotted the frog in Louisiana within the last 50 years and the species could not even survive on the family’s property if it were moved there. The only place the frog is found today is nearly 70 miles away from the property—in Mississippi.

This designation jeopardized development plans for Poitevent’s property that had been in place for years; it amounted to a de facto uncompensated taking of the family’s property for the sake of the frog.

By locking down land on behalf of a frog that doesn’t live there and can’t survive on the land, the federal government—by its own admission—took an estimated $34 million in economic activity away from the Poitevents and from Weyerhaeuser.

If ever there was a case for PLF representation, this was it. Our longtime environmental group leader Reed Hopper took the case on at the administrative level and saw the case up to the Supreme Court. Upon Reed’s passing last Christmas, a team of PLF attorneys worked together to ensure that the Court delivered justice to the Poitevent family.

The Court unanimously ruled that if the FWS is going to designate land as a “critical habitat” for an endangered species, the land must actually be a habitat for that species. But the importance of this Supreme Court decision extends beyond environmental law. It also contains an important defense of judicial review of decisions made by executive branch agencies, a critical step in holding those agencies accountable. Ultimately, this defense of judicial review may end up being the most important part of this ruling.

The Supreme Court decision remanded the case to the Fifth Circuit and earlier this month, the U.S. District Court for the Eastern District of Louisiana ruled that the Poitevents are the winners in their years-long battle over property rights and the reach of the Endangered Species Act.

Following his ultimate victory in court, Edward perfectly summed up his fight, “It’s gratifying after more than eight years to finally close the book on this relentless crusade against private property owners across the U.S.”