The EPA is preparing to adopt carbon emissions rules this summer that would likely shutter coal-powered plants in Florida and cost billions of dollars in compliance requirements.  The rules would also hurt manatees, which are currently listed as “endangered” by the U.S. Fish and Wildlife Service. 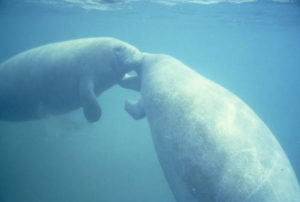 As our readers know, the USFWS may soon reclassify the manatee as “threatened,” because the species has made excellent gains in recent years. Just last month, the Florida Fish and Wildlife Commission counted more than 6,000 manatees in Florida waters.  That’s the most manatees the Commission has ever found in its aerial surveys of the species.  Power plants rank among the most popular places for manatees to congregate in the chilly winter months.

According to a recent article by the Miami Herald, about two-thirds of Florida’s manatees survive the colder months by swimming in the warm waters that flow from power plants. If the EPA forces some of those plants to shut down, it would most likely hurt manatees, potentially undermining their recovery.  The U.S. Fish and Wildlife Service’s last status review of the manatee specifically identified the “the potential loss of warm water at power plants” as “a significant habitat threat to the Florida manatee.”  That report said, “the loss of major power plant outfalls could result in a substantial decline in manatee abundance along the Atlantic Coast and in southwestern Florida.”  The EPA would do well to consider the unintended, but predictable, consequences that its regulations may have on the future of the manatee.