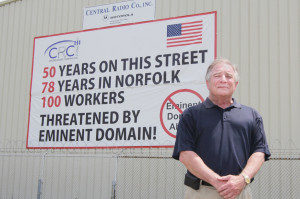 After nearly four years of litigation, property owners’ First Amendment rights were finally vindicated by the U.S. Court of Appeals for the Fourth Circuit in Central Radio Company v. City of Norfolk.  The court ruled that the City of Norfolk unconstitutionally prohibited the plaintiffs (who were protesting the government’s taking of their property) from displaying a 375-square-foot banner declaring: “50 years on this street, 78 years in Norfolk, 100 workers threatened by eminent domain!”

As described in an earlier blog post, the Fourth Circuit had previously ruled in favor of the City by upholding its sign code that imposed size and location requirements on political banners but not artistic banners, flags, or religious emblems.  Although sign code treated signs differently depending on their message, the Fourth Circuit nevertheless concluded that the code did not impose unconstitutional content-based restrictions because the City provided a “clear content-neutral purpose.”  The Supreme Court, however, ordered the Fourth Circuit to reconsider its decision after emphasizing in in Reed v. Town of Gilbert that government regulation of speech is content-based (and thus presumptively unconstitutional) if the law explicitly “draws distinctions based on the message a speaker conveys,” such as imposing a restriction that “depends entirely on the communicative content of the sign.”

This time around, the Fourth Circuit recognized that the sign code was content-based “because it applied or did not apply as a result of content” since it exempted artistic banners, flags, and religious emblems but not political banners.  Applying strict scrutiny, the court concluded that the City failed to satisfy its burden of proving that its restriction of speech was narrowly tailored to further a compelling government interest.  Accordingly, the Fourth Circuit held that the sign code was unconstitutional.  The district court will now consider damages and whether the City’s new ordinance (which removed the exemptions but specified that works of art and flags are typically not considered “signs” subject to the code) is also unconstitutional.