Blog > Issues > Separation of Powers > If courts are ever going to strike down an illegal national monument, this’ll be it

Often, it seems the federal government has it out for the English language. The President and federal agencies routinely twist the words in statutes beyond recognition. For instance, PLF has long challenged EPA’s bizarre claim that dry land is “water” under the Clean Water Act.

The government’s no fan of consistency, so it should come as little surprise that the President also claims the ocean is “land” when that suits his purposes. In Massachusetts Lobstermen’s Association, et al. v. Ross, PLF is challenging the designation of 5,000 square miles of ocean as the Northeast Canyons and Seamounts Marine National Monument, under a statute that expressly limits designations to “land owned or controlled by the Federal Government.” The government has moved to dismiss that case arguing that the President can essentially do whatever he wants, the language of the statute be damned.

Today, we filed our response to that motion. In our brief we explain that:

This is a clear case of the Executive Branch’s claim to have “discover[ed] in a long-extant statute an unheralded power.” A full century passed between the Antiquities Act’s enactment and presidents’ assertion of the power to designate ocean monuments. Such novel claims of broad and previously unnoticed power should be met with serious skepticism. That skepticism is well placed here as the ocean is not “land owned or controlled by the Federal Government” and the novel reinterpretation of the Antiquities Act conflicts with the limits Congress imposed on the designation of marine sanctuaries. The only court to consider whether the Antiquities Act extends beyond the nation’s territorial sea correctly held that it does not.

It’s as if Buster Bluth has been in charge of designating national monuments the last 12 years.

Fans of 100+ year old dictionaries won’t want to miss the brief’s discussion of the meaning of “land” when Congress enacted the Antiquities Act in 1906. [Hint: it’s the same as today—dry land, not the ocean.]

Congress, for its part, has also questioned how a statute expressly limited to land could justify a massive ocean monument.

Tellingly, no President even tried to get away with designating a monument in the ocean during the first 100 years after the statute was enacted, in light of the statute’s clear text. It took until 2006 for President Bush to violate this limitation on the President’s power. The result has been a sea-change [Sorry!] in the designation of national monuments:

Between 1906 and 2005, Presidents designated 92 national monuments on federal land, Indian land, and other land controlled by the federal government, covering a total area of 72 million acres. But they designated none beyond the limits of the territorial sea. . . That changed in 2006, when the President designated an ocean monument for the first time. [Since then, Presidents have designated] 37 additional monuments . . . covering 760 million acres. That is more than a tenfold increase over the previous 100 years combined. 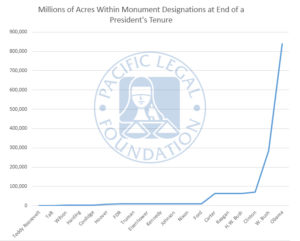 The dramatic increase in the area included in national monuments over the last 10 years is directly tied to the President’s novel claim that the statute authorizes ocean monuments. They are, in a word, huge. The Northeast Canyons monument, at issue in our case, is the size of Connecticut. Another ocean monument near Hawaii is twice the size of Texas.

If the president’s blatant violation of the law was not so disturbing, it would be funny to point out that when the Antiquities Act was enacted its author proclaimed that it would “certainly not” affect more than 70 million acres. Today, however, more than 800 million acres are contained within monuments and, if recent trends continue, that number will soon be in the billions.

Fortunately, courts are skeptical when the executive branch claims to discover some new broad power in an old statute. And appropriately so. In such circumstances, chances are the president is really just trying to manipulate the words of an old statute to get around Congress or the limits Congress has imposed under a different statutes.

That’s precisely why presidents adopted their bizarre interpretation of the Antiquities Act’s reference to “land owned or controlled by the Federal Government.” The protection of special areas of the ocean is supposed to occur under the Marine Sanctuaries Act, which Congress enacted because earlier statutes, like the Antiquities Act, were “directed almost exclusive to land[.]”

Congress imposed meaningful limits on the power to designate marine sanctuaries. Consequently, the presidents claim that the Antiquities Act applies to the ocean allowed him to make an end-run around those limits.

Importantly, this case isn’t about whether it’s a good idea to protect the marine environment. Congress has provided for that protection under the Marine Sanctuary Act and Magnuson-Stevens Act (which promotes sustainable fishing). Congress appropriately limited the power to designate marine sanctuaries, recognizing that it could undermine sustainable fishing. In opposing the Northeast Canyons monument, the eight regional fishery management councils appointed by Congress to regulate ocean fisheries explained that “marine monument designations can be counterproductive as they may shift fishing effort to less sustainable practices.”

This case is really about the rule of law and the Constitution’s separation of powers. The Constitution provides that Congress alone can legislate. If the president doesn’t like what the law says, he has to convince Congress to change it. He can’t simply arrogate to himself the power to do whatever he wants.

Unfortunately, that’s precisely what has happened under the Antiquities Act. To protect the Constitution’s balance of powers, Courts must enforce the law as written by Congress.

Although no court has yet held that a monument exceeded these limits—a fact Federal Defendants stress—this case concerns a monument far beyond any previously considered. The statute’s clearest limit, and one that courts can readily enforce, is that monuments must be on “land owned or controlled by the Federal Government.” The ordinary meaning of this phrase does not extend to the ocean beyond the nation’s territorial sea—a limit that Presidents respected for the Antiquities Act’s first 100 years. And the only court to consider whether the ocean is “land owned or controlled by the Federal Government” correctly held that it is not.

The Federalist: Courts need to stop presidents from calling oceans ‘national monuments’ to illegally put them off-limits December 17, 2020 I By ELIZABETH SLATTERY

Regulating fisheries out of business won’t protect the oceans July 02, 2019 I By DANIEL ORTNER