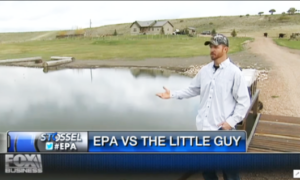 For years, Pacific Legal Foundation has been helping to protect individuals from the irrational and abusive expansion of the Clean Water Act (CWA). In far too many cases, the government has claimed violation of the CWA when individuals use their own land in a way that does not pollute federal waterways. Often, the government has used the CWA to regulate dry land on property miles away from any navigable water.

Recently, the President responded to this abuse by issuing an executive order calling for the review of what constitutes “waters of the United States” and, thus, what can be regulated under the CWA. This executive order has caused an uproar from groups that want the federal government to regulate anything and everything in the country. One such group, the Center for Biological Diversity (CBD), today filed a lawsuit relating to the executive order.

Specifically, CBD has asked for documents relating to meetings the administration held prior to issuing the executive order. CBD claims that it wants to know whether “special interests” influenced the decision to review the scope of the CWA.

It is hard to know what CBD would consider a “special interest,” but we do know that the stories of PLF clients affected the administration. During his signing ceremony of the executive order, President Trump referenced the story of Andy Johnson, who faced massive fines because his family built a pond on their property.

Maybe the administration was also “influenced” by the story of John Duarte, who is facing a $2.8 million fine because he planted wheat in a wheat field. Maybe someone within the administration knew of the story of the Sacketts, who were threatened with over $100 million in fines for trying to build a house on their land. Maybe the President did not want the CWA to be used against people like Peter Smith, who cleaned up the land he purchased (25 miles from the nearest navigable river) but still had to face government officials who claimed he violated the CWA. Or against family-owned businesses like the Hawkes Company, which encountered federal regulators for wanting to harvest landscaping moss on its property 90 miles from a navigable water.

In none of these cases did the individuals pollute federal waterways or threaten the environment. Instead, they faced massive penalties for using their own land. PLF’s clients show the negative effects of widespread government regulation and the consequences of expanding the use of the CWA. If the documents requested by CBD show that these cases affected the decision to issue the executive order, it will not show some sinister plot to pollute water. Instead, it will just show that individuals within the administration have a heart and a proper understanding of the CWA’s limits.