Won: The U.S. Supreme Court unanimously ruled that the EPA cannot shelter its “waters of the United States” rule from judicial review by arbitrarily limiting where victims can sue.

The EPA adopted an extreme rule redefining “waters of the United States” subject to federal control under the Clean Water Act. The new rule covers virtually all waters in the U.S. and much of the land, extending to every tributary of a “navigable water,” isolated pools and potholes, the 100-year flood plain covering millions of stream miles, and, on a case-by-case basis, any water within 4,000 feet of a tributary. The exemptions are so narrow as to be laughable, if the agencies even honor them. Under the Clean Water Act, the Corps and EPA can limit or prohibit the use of any water or property subject to their jurisdiction and back up their enforcement with ruinous fines ($37,500 a day for alleged violations) and even criminal prosecution.

PLF represents ranchers, farmers and private parties from several states arguing that the new rule violates the Clean Water Act itself, as interpreted by the Supreme Court, and exceeds federal power under the Constitution. PLF sued the Army Corps and the EPA in Minnesota federal district court to challenge EPA’s “WOTUS” rule. PLF filed a parallel challenge in the Eighth Circuit Court of Appeals that was consolidated with numerous other challenges to the rule in the Sixth Circuit Court of Appeals. The reason for the dual filings was because the federal courts are divided on the question of whether challenges to Clean Water Act jurisdiction should be brought in district (trial) courts or in circuit (appellate) courts. The text of the CWA states that challenges to the agency’s jurisdiction should be brought in district courts, but the Minnesota district court nonetheless dismissed the case for lack of jurisdiction and the Sixth Circuit Court favored a “pragmatic approach” to the Act that requires appellate courts to hear such challenges.

The National Association of Manufacturers—one of the opponents of the overly expansive WOTUS rule—petitioned the Supreme Court to review the Sixth Circuit case. All other parties to the various court cases were designated as “respondents” in the Supreme Court case, including an extensive array of PLF’s clients. The Supreme Court granted the petition and on January 22, 2018, unanimously ruled that the EPA cannot shelter its “waters of the United States” rule from judicial review by arbitrarily limiting where victims can sue.

NAM Petition for Writ of Certiorari 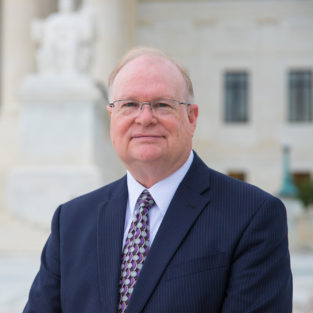 How federal agencies rig the system

Running down the controlling opinion in Rapanos v. United States

Thank you, President Trump, for Acting on Flawed WOTUS Rule

The Administration calls for review of flawed WOTUS rule!

The politicization of the clean water rule

PLF to National Association of Regulatory Utility Commissioners: “Yes, the WOTUS rule is as bad as it seems—in fact, it’s probably worse.”

What's the future of WOTUS?

PLF pays another visit to the Supreme Court

Congress and Obama clarify their positions on the WOTUS rule, and it doesn't look good for the President

Rejecting the WOTUS rule in the courts and in Congress

Some pictures really are worth a thousand words

Should Congress step back and let the courts handle the WOTUS rule?

More clarification on "waters of the United States"

Why America’s farmers are alarmed about expanding WOTUS

Waters of the U.S.: Separating fact from fiction

U.S. Supreme Court to decide whether the EPA can evade judicial review