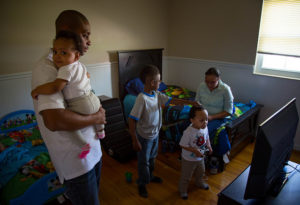 Edmund Lee, Jr., a fourth-grade student in St. Louis, is smart, likable, hardworking, optimistic, and a big fan of the Carolina Panthers. None of these qualities mattered when Edmund sought to continue his education at Gateway Science Academy, an excellent charter school in the City of St. Louis, after he moved to a safer neighborhood in St. Louis County. Rather, the only reason Edmund could not attend the school was because he is African-American.

Defendant Voluntary Interdistrict Choice Corporation (VICC) uses state funds to administer a discriminatory transfer program. VICC’s program prohibits white students in the City of St. Louis from transferring to schools in St. Louis County, and bans African-American students in the County from transferring to magnet schools in the City. Missouri law expressly applies this discriminatory policy to charter schools, such as Gateway. This strange story has gotten even stranger. The district court held that VICC’s unequal treatment on the basis of race actually complied with the constitutional mandate of equal protection. Today PLF attorneys filed Edmund’s appeal of this unjust ruling.

The district court held that Edmund couldn’t sue in federal court, because VICC didn’t cause Edmund’s injury. That is wrong. VICC’s policy makes Edmund ineligible to attend magnet schools in the area, imposes additional barriers on his ability to attend Gateway, and denies him the equal protection of the laws. True, Edmund has not asked Gateway for a waiver or sued Gateway in state court, but that shouldn’t matter. Edmund’s white neighbors don’t have to do either of those things before they are permitted to attend Gateway. Edmund shouldn’t be required to go through those hoops only because he is African-American.

The district court also held that a decades-old decision requiring St. Louis schools to desegregate barred Edmund from challenging VICC’s policy as it is applied to him. But why? Edmund is an African-American boy and Gateway is a predominantly white school. Thus, even leaving aside the question of whether a desegregation order can ever justify disparate treatment on the basis of race, it plainly cannot justify such treatment in this case.

We are optimistic that the Eighth Circuit will vindicate Edmund’s constitutional rights. The district court’s unfavorable opinion was a temporary setback in our quest to end racial discrimination, but we shall overcome.