Last month, we celebrated when the City of Alexandria repealed its unconstitutional ban on “For Sale” signs, which we were challenging in our lawsuit, McLean v. City of Alexandria. Today, we won the legal battle. The U.S. District Court for the Eastern District of Virginia ruled in our favor, declaring that the City violated Scott McLean’s First Amendment rights when it stopped him from advertising his car for sale. 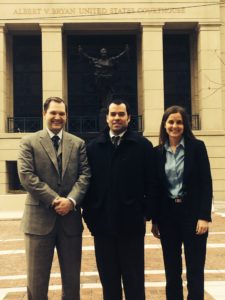 The City cited McLean a couple of years ago for placing two standard “For Sale” signs in his car window. He paid the fine and sold his car four months later by parking it in a neighboring City and walking the half-mile to and from his home. But when he wanted to sell his truck more than a year later, he decided to reach out to PLF for help fighting the City’s unconstitutional ordinance. He wasn’t the only one the City targeted. Since 2010, the City has cited more than 700 people for posting “For Sale” signs on their cars, making it more than $28,000 in fines.

A few days after PLF filed suit in October, and after the Washington Post and other news outlets reported on the matter, the City suspended enforcement of the ordinance. Five months later, it repealed the ordinance, admitting that it was “outdated” and “not necessary.” But instead of admitting that it violated McLean’s free speech rights, the City asked the court to dismiss our case, because it had repealed the ordinance. Fortunately, the court denied the City’s request, and declared that the City violated the Constitution when it blocked McLean’s right to advertise his car in the past.

This decision is significant, because it will make it more difficult for the City to bring back the unconstitutional ordinance in the future. And it sends a message to other cities across the country that have similar laws on the books: cities must respect the First Amendment right to advertise, just as they must respect our right to speak on other matters.