Justice Ginsburg was visited by the ghost of Justice Scalia.

Justice Ruth Bader Ginsburg today issued an apology today on behalf of all Justices, living and dead, who ever espoused the notion of a “living constitution.” Saying that she was visited by the ghost of her late friend, Nino Scalia, she exclaimed, “it’s a stable constitution that we need, not a morphing living virus of a constitution that infects every liberty and right that it touches!” She continued that she highly recommended Bryan Garner’s assessment of Scalia’s originalism jurisprudence, see here, and was now a die-hard originalist. “I believe the strongest guarantor of our liberties can be found in the original meaning of the Constitution and its amendments. So as to everything I may have said before, I say, ‘fugedaboutit.'” Confused? Well, how often do I get to write the President’s report on April 1st? 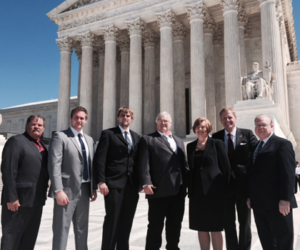 But don’t take our word for it, you can listen to the argument and read the transcript here.
Of course, one can never be certain how the Justices will rule until they do, but we feel confident that they understand our arguments well and most were troubled by some of the rather unrestrained views of the federal government. Also, be sure to look at our blog post here.

The Supreme Court turned back the Friedrichs’ forced union dues case with a 4-4 split, thus upholding the Ninth Circuit’s decision. This is the case where we were on the brink of freeing teachers’ from making involuntary dues to teachers’ unions, in violation of their First Amendment rights. In this case the loss of Justice Scalia was sorely felt. For more, see our blog post here.

Property rights  are rights too

PLF filed this amicus curiae brief in the Second Circuit in Leonard v. Union Vale, asking the court to recognize that the Due Process Clause of the Fourteenth Amendment means what it says: That property uses cannot be denied without due process of law. The underlying case involves a town unilaterally taking away a landowners’ development rights. The town argues that it can do what it pleases because the right to develop property is not protected by the Constitution. Our blog posts explains more here.

Businesses have rights too against unequal legislation

We filed this amicus brief in Fowler v. Lanier arguing that the State of California cannot pass laws that single out a couple of businesses for unequal treatment just because they are in a dispute with a union. That sort of thing is prohibited as a “bill of attainder” in the Constitution as explained here in our blog.

We filed this amicus brief  in Google, Inc. v. Pulaski & Middleman, a case where on-line advertisers sued Google over being charged for ads that showed up on orphan web pages — the sort of page that one is directed to after a bad search. We’re asking the Supreme Court to take this case up so it can reverse the Ninth Circuit. The problem for this type of class action lawsuit is that many of the so-called class members may not have suffered any injury, or at least any identifiable injury. So the court below simply came up with a mathematical model for injury — a scheme not consistent with the Constitution’s guarantee of due process for defendants in a lawsuit. Our blog explains why this is wrong.

The California Supreme Court issued this favorable decision in Baltazar v. Forever 21, a case involving an employee who tried to wriggle out of an arbitration clause in her employment contract.  Remarkably, the Court unanimously found that the clause was lawful and enforceable, which is a great victory for the stability of contracts. For more, see our blog post here.